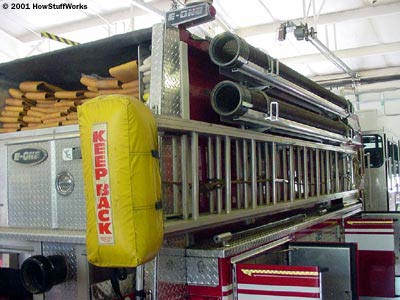 The large black pipes on the side of the engine are the hard suction lines. The walls of these pipes are rigid so that the suction of the pump does not collapse them.

The primary function of any pumper/tanker fire engine is to carry water in a water tank or suck water in from an outside source, such as a fire hydrant, drop tank, swimming pool or lake.

On this pumper/tanker fire engine, the primary water tank is inside the vehicle, it holds 1,000 gallons (3,785 liters) of water and it runs down the center in the rear of the truck. A drop tank is like a big aboveground pool that can hold about 2,000 gallons of water. A 6-inch diameter, hard suction line is used to suck water out of the drop tank or other exterior water source.

Water stored in the engine's tank or sucked through an outside source is then discharged through water lines, or hoses. These lines are connected at points around the truck. We'll look at all the different lines later.

The heart of the pump/tanker is the impeller water pump. On this particular fire engine, the pump is located just behind the jumpseat area, where the firefighters sit. An impeller is a rotor-like device that has curved blades. Driven by its own diesel engine, the impeller spins inside the pump at a high rate. When water comes into the pump, it hits the inner part of the impeller and is slung outward. Water pressure is created by centrifugal force from the spinning action of the impeller. A valve opens to allow water to hit the center of the rotating impeller. This action is described as entering the eye of the impeller, according to Capt. David Price of the Bayleaf Volunteer Fire Department in North Carolina.

The pump panel is used to control which hoses have water flowing through them at any given time.

You control the hoses using the truck's pump panel on top of the fire engine. The pump panel is a series of levers and switches that controls how much water is flowing and which lines are being discharged. When arriving at a fire scene, the driver will jump out and climb to the top of the truck to begin pump operation. An indicator -- a series of red lights on the pump panel -- lets the operator know how much water is left in the tank.

The first thing the pump operator is going to do is make sure that the valve between the tank and pump is open. An electric switch on the right side of the pump will open that valve, and ensure that water is flowing into the pump. Next, the operator will check to see which lines have been pulled off the fire engine by the firefighters, and the operator will discharge those lines. "Discharge" means that water is allowed to flow out of the pump and into the hose. The lines are color-coded to make it easy for the operator to know which lines to discharge. The color of the line corresponds to a plate below each lever on the pump panel.

Most of the discharging is controlled by a built-in electronic device, called a mastermind. It automatically controls the pump, and runs the pressure up or down. It also has a built-in relief valve, so that if one person suddenly cuts off a line, the pressure from that line doesn't automatically get fed into another line.

This truck also has a foam system, and carries about 20 gallons (76 L) of foam. The foam tank is embedded in the main water tank. Pumper/tankers carry different types of foam. This particular truck carries Class A foam, which can be used to saturate materials inside a structure to keep those materials from re-igniting. Class B foam is used to fight car fires and other fires where flammable liquids might be present.

In the next section, you'll learn more about the various hoses on the fire engine.

Before water can be sucked in from exterior sources, the line has to be primed. Priming the hard suction line involves pumping all of the air out of it. To prime the pump, the operator flips an electronic switch on the pump panel.