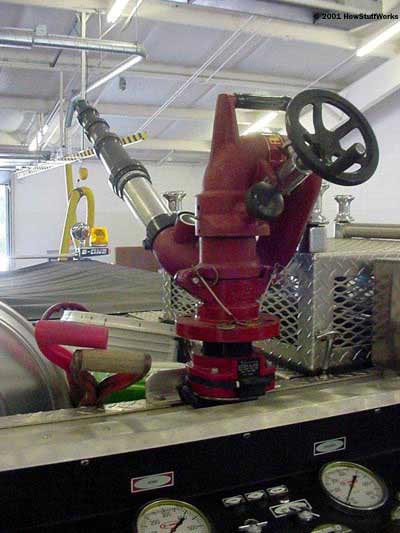 The deluge gun can discharge 1,000 gallons of water per minute.

There are many types of hoses on the fire engine, and each has its own specific role in putting out a blaze. Hoses, also called lines, will put out different amounts of water depending on the hose length, diameter and the amount of pressure in the pump.

When responding to a house fire, the firefighters will immediately pull off the crosslay hoses. These lines are located directly below the pump panel. They lay out in the open and are light, so they are easy to get off the fire engine for attacking a fire. Crosslays are 200 feet (61 m) long, have a diameter of 1.5 inches and can gush water at 95 gallons (360 L) per minute. For smaller fires, such as small wood fires or chimney fires, the small booster line is adequate. A booster line is the smallest hose on the truck and has a diameter of about 1 inch.

Located directly above the pump panel is the deluge gun, also called a deck gun or master stream. Just by looking at it, you know why this water cannon carries those names. The deluge gun is used to put a lot of water on large fires. It can put out in excess of 1,000 gallons per minute.

"If we get a big fire, like a house fire that we can't control with handlines, we can darken it down with that," Doug Mchose, of the Bayleaf Volunteer Fire Department, said. "We can use that on it for a couple of minutes to knock it down to where we can get in there."

The truck also has at least three lines called preconnects. These lines are preconnected to the truck in order to save time at the fire scene. There's one preconnect on the driver's side, one on the back and one on the captain's side of the truck. These lines are between 1.5 and 2.5 inches in diameter, and can put out 250 gallons (946 liters) per minute.

The wide yellow hose in back carries water from the hydrant to the fire engine.

In one of the compartments on the captain's side of the truck, there are extra sections of hose. There are two extra sections of the 5-inch hose: a 25-foot and a 50-foot section. These two sections are called curb jumpers, because they typically lay on the curb. These sections give firefighters just a little bit more line to connect to a fire hydrant without having to get another 100-foot section down.

Also stored in this compartment is a hose pack. A hose pack is a small, bundled hose that can be taken to the higher levels of a building. It is banded to make it easier to carry up a ladder. A firefighter can just throw it over his or her shoulder and take it up and through a window. Usually, a hose pack is used if the other lines can't reach inside. This hoseline will connect to the hose that runs up the ladder of the ladder truck, which you will learn more about in the next section.