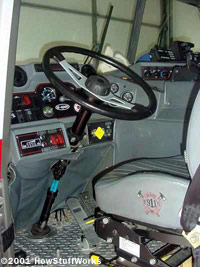 As mentioned before, the driver is responsible for controlling the pump panel. For this reason, there are some basic controls on the driver's dashboard that are related to that task. Two red switches near his left hand operate a generator and jet dump. A jet dump essentially discharges all of the water in the tank into a drop tank through a large discharge outlet in the back.

The jumpseat area is like the backseat of your car. This is the area where four to six firefighters sit on the way to the fire. There is one row of four seats that sit back-to-back with the captain and driver. There are also two fold-down seats directly across from the row of four seats. In between the fold-down seats, there several yellow pouches that contain the firefighters' masks.

Air packs are located in the back of the four main seats. By already having the air packs on the truck, all the firefighters have to do is put them on their shoulders. Each air pack has 30 minutes of air.

For more information on fire engines, firefighters and related topics, check out the links below.