Keeping Us in Line: Train Tracks 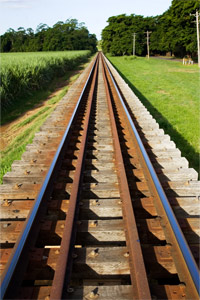 The ties in these train tracks near Queensland, Australia, are wooden, and the rails stretching into the distance look to be made of steel.
Tim Graham/­Getty Images

­Railroad tracks guide the train, acting as the low-friction surface on which the train runs and often transferring the weight of the train to the ground below. The track may also provide electrical power along the third rail, as you'll recall.

A railroad track consists of two parallel steel rails set a fixed distance apart, called the gauge. The standard gauge is 4 feet 8.5 inches (1,435 millimeters). The rails are connected to each other by railroad ties (called sleepers in Europe), which may be made of wood or concrete. The rails are usually bolted to the ties. The ties are set into the loose gravel or ballast. Ballast often consists of loose stones that help transfer the load to the underlying foundation. The ties "float" on the ballast and the weight of the track keeps them stabilized.

When rail workers are laying train tracks, they often use a flat-bottom steel rail that resembles the steel I-beam girders of construction. The rail has a wide base or foot, a narrow web and a head (wider than the web, but not as wide as the foot). The weights of the rails vary from 80 to 160 pounds (36 to 73 kilograms) per yard depending upon the type of train operating on the tracks and the country. Segments of rail track may connect to one another by bolted plates called fishplates, but most modern rail segments are welded together to provide a smooth ride.

Beneath the rails, the track is sometimes cushioned or ballasted. The foundation may be made of sand or concrete. In many cases, railroad tracks are elevated above the surrounding ground and have drainage systems to remove water. They may also be surrounded by fences to prevent animals and people from wandering on to the tracks. Finally, electrical trains will have either a third power rail or overhanging wires that supply the electricity.

­Steel tracks can be straight or curved to steer the train since steel is easily bent into shape. Depending upon the topography, some curves may be slightly angled or banked to help the train stay on the track as it negotiates the curve. At various points along the track, rails may have switches, which can move a train from one track to another. Switches and accompanying track are important for controlling traffic. For example, when two trains are operating on the same track, a switch can allow one train to pull off to a holding track while the other one passes. A switch also can change a train's direction like moving it from a north-south track to an east-west one. Many railroad stations have switching yards where trains are assembled and moved onto various tracks.

Finally, signals along the tracks keep the train operators informed of traffic conditions ahead. Signals control train traffic much like traffic lights control automobile traffic on roads. Besides signals, many locomotives have radios and computer terminals that monitor traffic conditions using information supplied by signaling centers, which are similar to air traffic control stations.

Now that we have the mechanics down, let's see how they fit together to move packages and people.

One popular myth is that the standard train gauge was based on the width of the Roman chariot. This is untrue, especially as the Romans didn't use chariots to transport goods and supplies. The standard train gauge of 4 feet 8.5 inches (1,435 millimeters) was chosen by British inventor George Stephenson, who designed the first railway system. Stephenson had been working with various railways used in British mines and settled on what is now the standard gauge.