by Julia Layton Nov 4, 2016
After Sept. 11, airport security tightened and Amtrak's popularity in the Northeast got a big boost. MichaelKnudsen/Getty Images

An Elon Musk brainchild is in the news again, and this time, the story is even wackier than mass-transit to Mars in 2022. This time, reported Tech Crunch on Oct. 13, investors put another $50 million into developing a Musk design that's supposed to get Americans to take the train.

Granted, this train would use Musk's (mostly theoretical) "Hyperloop" propulsion system to move faster than a plane, and do it through a metal tube: L.A. to San Francisco in 35 minutes, New York to L.A. in three hours.

But still. North and South America (Brazil, Canada and the U.S.) boast 27 percent of the world's railway and 1 percent of its ridership. Amtrak, the government-backed provider of U.S. passenger-rail service, has 26 regional and 15 long-distance routes that together cover a good chunk of the country, with a few stops in Canada. In 2015, those routes carried almost 31 million passengers. Mozambique's railways, notes The Economist, carried 108 million passengers in 2011. For reference, Mozambique has about one-twelfth the population of the United States.

"Our primary [regional] competition is people driving their personal vehicles," writes Magliari via email. They're traveling "for business, personal and family reasons," he writes, and less so for leisure.

And most of them are traveling in the Northeast, where taking the train makes perfect sense.

Where Americans Totally Ride the Train

Amtrak's ridership has increased dramatically in the last two decades — 55 percent since the late '90s, according to a 2013 Brookings Institute report — mostly by way of the Northeast Corridor. The 17 lines that connect major cities from Virginia to Montreal account for more than half of Amtrak's ridership. Amtrak told The New York Times' Ron Nixon in 2012 it carries 75 percent of people traveling from New York to Washington, D.C.

Amtrak's popularity in the Northeast, writes Nixon, "has been building steadily since the Acela was introduced in 2000 and airport security was tightened after 2001."

Around the time that air travel sunk to a new level of awfulness, Amtrak introduced its only high-speed route, the Acela Express. The Acela runs from Boston to Washington, D.C., with stops in New Haven, New York, Philadelphia and Baltimore. The whole route takes about seven hours. The New York-to-Washington segment takes about three hours, according to Independent Traveler.

New York to Washington by plane runs at least that, assuming about one hour in the air and a very optimistic two hours at the airport. A coach seat costs anywhere from $108 to well over $250 roundtrip, depending on airline (Google Flights, 11/4/16) and how much stuff you can cram into a purse.

A coach ticket on the Acela, which includes two personal items, two carry-on bags and two checked bags, starts around $175 roundtrip (Amtrak, 11/4/16). The Acela also has legroom, free WiFi, a dining car, at-seat outlets, big bathrooms and a lounge with a full bar. It's unclear why someone would fly.

City planner Danya Sherman calls the long-distance train "one of America's greatest and least heralded public spaces." When Sherman spent 30 days on the train researching her master's thesis, "Engines of culture: learning from the unique public realm of the long distance train," she found a unique sense of commonality among passengers.

"People seemed to describe the train as a collective experience, even if what they enjoyed was an individualistic, meditative, or productive experience," Sherman shares via an email.

There is a practical side. Sherman sometimes found herself talking to commuters.

"Lots of younger and middle-aged men [were] riding from rural parts of the northwest to North Dakota ... to work in the oilfields for several months," Sherman writes. "It's the cheapest and easiest way to get there."

Amtrak spokesperson Magliari notes that trains "serve many locations where air service is nonexistent or very expensive, and we are often a lower-priced option without the environmental costs of flying or driving."

But usually it's not practical. At all. Usually, it's leisure.

People who choose the train for long-distance travel are a varied bunch. Jeffrey Orenstein, a travel journalist and retired political science professor, takes the train about three times a year. He finds the ridership to be "an interesting cross-section of life in the regions involved," he writes in an email.

Orenstein, whose website, SimplySmartTravel, specializes in rail vacations, has met legislators, tourists, farmers, students and retired people, among others. He travels first class and eats in the dining car, so his fellow passengers "tend to be relatively affluent" — mostly middle and upper-middle class, with a few students peppered in.

Sherman, riding from New Orleans to Los Angeles in coach, met "a gay couple going to Houston, a Latino family headed to Albuquerque, an indie rock-loving pizza-maker from Austin, a minister going to Tucson and an L.A.-bound retired merchant marine who taught me how to play dominoes," she writes on NextCity.

Most of these long-distance passengers seem to have at least one thing in common. They think getting there is part of the ride. The scenery, the "commonality," the time to think, the lack of WiFi — and, for many, the chance to talk to strangers. Sherman spent two hours philosophizing about rail travel with a man she met in the glass-walled observation car.

Orenstein's a talker, too.

"As an American traveling cross Canada during the 2016 presidential primary season," writes Orenstein, "my wife and I got into some fascinating discussions about American politics."

"Canadians are very interested (and often perplexed) about our system and choices," he adds.

Orenstein, like the rest of the world, thinks nothing short of national high-speed rail will get the average American to travel long distances by train. Amtrak has big plans for expansion and upgrades, says Magliari, assuming the funding is there.

If not, though, no biggie. By one very optimistic estimate, Hyperloop should be ready for passenger service by 2018.

Now That's Cool
A team of engineers from the University of Cincinnati revealed a levitating Hyperloop pod in October 2016.

3 Myths About Smartphone Batteries That Need to Die

Drivers Who Merge at the Last Minute May Be Annoying, But They're Right

Still Riding the Rails: Life as a Modern Hobo

A Train That Goes Nowhere Could Change How We Store Energy 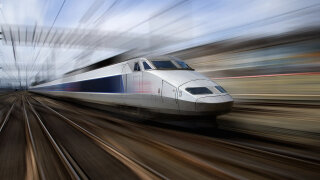