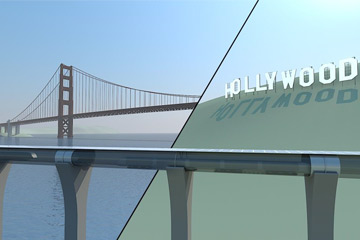 The Hyperloop tube would stretch from San Francisco to Los Angeles, with pods that whisked folks along for a 35-minute ride unlike any other.
Image courtesy Elon Musk

Elon Musk, the billionaire founder of PayPal, has given us snazzy, new electric cars courtesy of Tesla Motors and private spaceflight through his company SpaceX. Now Musk envisions cutting the travel time between Los Angeles to San Francisco to a mere 35 minutes. He has proposed building a high-speed transportation system that would allow humans to travel 760 miles (1,223 kilometers) per hour, or Mach 0.91 (assuming 68 degrees F/20 degrees C).

If it sounds like something out of a sci-fi movie ("Logan's Run," anyone?), it is. Still, if Musk has his way, the futuristic Hyperloop will replace bullet trains and revolutionize transportation just as the locomotive, automobile and airplane did. The only problem is that no one really knows if the Hyperloop will work and how much it will actually cost.

That's not stopping Musk from pushing the concept. He says the price tag is a mere $6 billion. Many people are a bit skeptical. Some experts say they couldn't build a decent-size bridge for such a paltry amount [source: Bilton]. Moreover, California is now working on a plan to build a much slower rail system between the two cities at a cost of $60 billion. It was this proposal that drove Musk to envision the Hyperloop. The California plan, Musk wrote in a 57-page white paper he published on the SpaceX site in August 2013, was expensive for a bullet train that is "one of the slowest in the world." In case you're wondering, the California High-Speed Rail Authority estimates the train will be capable of traveling more than 200 miles (322 kilometers) per hour.

Regardless of the price and of the difficulty of creating an almost-supersonic transportation system, Musk says the Hyperloop is a cross between a train and plane. In many respects, it's sort of like traveling in a bullet through a shotgun barrel partly using technology from an air hockey game. So, how does Musk envision the Hyperloop actually working? Hope onboard to find out.

In Elon Musk's world, the Hyperloop will become a "fifth mode" of transportation, standing beside planes, trains, automobiles and boats in the pantheon of mechanized movement. Musk envisions people traveling through the Hyperloop in pods that whiz through steel tubes mounted on pylons, or pillars, designed to withstand California's earthquakes. Those pylons, made of reinforced concrete, would be spaced every 100 feet (30 meters) or so and stand 20, 50 and 100 feet (6, 15 and 30 meters) high, depending on the terrain [source: SpaceX].

How exactly does Musk plan to accomplish this amazing task of physics? Well, he looked at several possibilities. Most, he said, fall short for a variety of reasons. For example, the Hyperloop might be able to use powerful fans to push the pods, much like pneumatic tubes that offices use to shove mail from one building to another. Musk says while it's possible to construct such behemoth fans, it's impractical because a 350-mile (563-kilometer) -long column of air moving so rapidly would create an enormous amount of friction inside the tube, making the type of speed he hopes to achieve impossible [source: SpaceX].

The entrepreneur has also ruled out moving the pods through vacuum tubes using electromagnetic suspension, the same technology that maglev trains use. Musk explains that it's difficult to create a perfect vacuum in the tubes, especially with thousands of pods entering and exiting every day. Moreover, the aluminum tubes might crack or leak, letting the air out of the system.

"All it takes is one leaky seal or a small crack somewhere in the hundreds of miles of tube and the whole system stops working," Musk wrote in his initial Hyperloop report.

Another technical problem centers on the pod moving through a tube containing air. Musk says if the walls of the tube and pod are close together, "the capsule will behave like a syringe." In other words, the pod would push the entire column of air in the system instead of letting it flow past. The result is that the pods would have to travel very slowly, or engineers would have to build a massive tube to make traveling quicker. In that case, riders would be traveling several thousand miles per hour, subjecting their bodies to crushing G-forces when going around the slightest bend [source: SpaceX]. 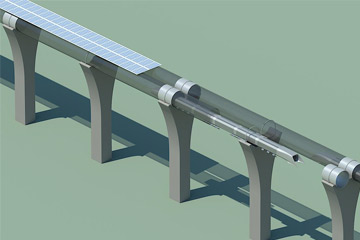 The list of problems seems overwhelming. But Musk, ever the resourceful innovator, has enlisted a team of engineers from Tesla and SpaceX to help him find a solution. They propose elevating two tubes (one going north, the other south) alongside Interstate 5 and reducing the air pressure inside.

The theory is simple: Jet aircraft fly at high altitudes through air that is less dense and drag is reduced. The Musk team decided the air pressure inside the system should be one-sixth the pressure of the thin atmosphere on Mars, which significantly reduces drag on the speeding pods. In addition, situating the Hyperloop in the median of I-5 for the most part is a cost-cutting decision because it allows the developer to avoid buying land from those living along the route [sources: Belfiore, SpaceX, Lavrinc].

They also made the pod the heart of the system, aiming to keep the tube as low-tech as possible. The plan is to design a pod with metal skis that ride, or levitate, on a cushion of air pumped through small holes in the skis. The concept is similar to an air hockey game, except the air is generated by the high-speed passage of the pod through the tube, and a super-powerful electric compressor on the front of the pod that pumps air to the back. (Not familiar with electric compressors? Often, you can find them employed on construction sites on a variety of tasks, especially where air tools are used.) Magnets on the skis, coupled with an electromagnetic pulse, give the pod its initial shove. That shove, Musk told reporters, would be similar to what a passenger experiences onboard an airplane at takeoff. "Then once you're there," Musk says, "there's no sense of speed" [sources: Belfiore, SpaceX, Lavrinc].

Linear induction motors, which get their juice from magnets and conductors, would be placed at various points along the tube and keep the pod moving fast and steady with little chance of accident. Speaking of which, emergency exits would be built along the tube. The Hyperloop would get its power from motors and batteries developed for the Tesla Model S electric car, along with solar panels placed on the roof of the tubes [sources: Belfiore, SpaceX, Becker, Lavrinc]. 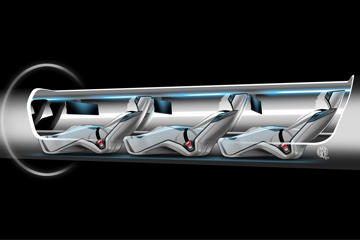 This cutaway of the Hyperloop passenger capsule gives you an idea of what it might be like to sit in the proposed transportation system.
Image courtesy Elon Musk

Musk promises that the pods would be comfortable and safe. Pods would travel through the Hyperloop one at a time, leaving every 30 seconds or so at rush hour and spaced 23 miles (37 kilometers) apart on average. Passengers can enter and exit the tube at each end and via branches along the loop (see Musk's white paper for proposed route specifics). Each passenger pod is designed to hold 28 people seated in 14 rows of two, along with a luggage compartment in one end, and larger pods can hold a car. Passengers would pay $20 for a one-way ticket [sources: Belfiore, SpaceX, Lavrinc].

Once on and rid of their luggage, passengers could settle into their seats, buckle their seat belts and flip on their personal entertainment displays for the 35-minute ride. Just don't get up to use the bathroom. Because there's no mention of one. Yet. And with a maximum pod height of 6.11 feet (1.10 meters) and width of 4.43 feet (1.35 meters), it might be a little too cozy for the claustrophobically inclined [sources: SpaceX].

Will the Hyperloop work? Who knows? Musk seems to think so, and many people say it's possible. The closest thing to the high-speed Hyperloop is the maglev bullet train, which can top out at 361 miles (581 kilometers) per hour. Jim Powell, who helped invent the train, told The Verge that Musk is on to something by enclosing the system in a tube. He said that a system out in the open creates too much drag. Powell added that drag could still be a problem even inside the hermetically sealed Hyperloop, and maintaining a speed of say 600 miles (966 kilometers) per hour might be difficult [source: Brandom].

Moreover, the Hyperloop would work best if the tubes were built in a straight line, which they can't be due to the landscape between Los Angeles and San Francisco. Powell said riders could get sick if the pods turn too sharply [source: Brandom].

While many people agree that the technical problems created by the Hyperloop could probably be solved, many question at what price. They say the $6 billion price tag is excessively low for a high-speed project of this magnitude. Heck, renovations to the San Francisco Bay Bridge totaled $6.4 billion [source: Thanawala]. For his part, Musk doesn't want to spend his own money and hopes others will step forward, maybe even you, dear readers, via crowdfunding sites such as JumpStartFund. If not, then perhaps the man who put the first privately owned rocket into space will also give the world the Hyperloop.

Author's Note: How the Hyperloop Works

Innovation is scary. When someone proposes a revolutionary concept, our first reaction is to dismiss it, say that it can't be done. Ask the Wright brothers or the astronauts who walked on the moon. The real dilemma may not be in the speed at which science and technology move or in the products it creates, but in our inability to deal with the implications of new discoveries and technologies in a thoughtful manner. Whether motivated by unadulterated greed (read: the railroad barons of the late 19th century), or for the public good, history has shown that society's innovators, its dreamers, have always moved the ball forward, leaving the rest of us to follow.

Electric Boats Make Emission-free Sea Travel a Reality
State-issued IDs May No Longer Be Enough to Board U.S. Flights
Drones May One Day Help Honeybees Pollinate