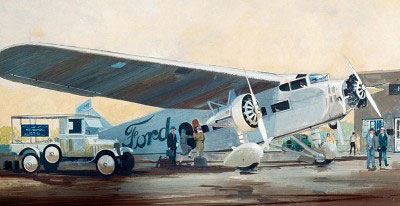 The Ford Tri-Motor classic airplane was used widely in both military and non-military applications.

During the 1920s, the name Henry Ford was magic, for it identified the man who had given wheels to America in the form of the 15 million Model Ts that rolled off his sophisticated assembly lines at ever-lower prices.

It was natural for America to assume that if Ford turned his hand to aviation, the same sort of magic would result. Henry thought so, too.

A famous designer, William B. Stout, had kindled the interest of both Ford and his son Edsel in aviation in 1924. Stout had built a series of all-metal airplanes culminating in the ungainly Model 3-AT before the almost inevitable falling out with Ford. Ford replaced Stout with Harold Hicks and Tom Towle, who, with other engineers including Otto Koppen, refined the design to produce first the Model 4-AT classic airplane, then the definitive 5-AT, the immortal "Tin Goose" Tri-Motor.

The Ford Tri-Motor classic airplane made its first flight on June 11, 1926. Passenger capacity of the plane was 11; the views were thrilling.

Similar in appearance to the popular Fokker transports of the time, the Tin Goose had two great advantages: the Ford name and all-metal construction. Over the years, 199 Ford Tri-Motors airplanes would be built, and they would serve all three branches of the U.S. military, many airlines, many corporations, and 20 foreign countries. Strong, reliable, and surprisingly maneuverable, the Ford Tri-Motor inaugurated transcontinental airline service in the United while flying for Transcontinental Air Transport.

Following the inaugural flight in 1926, public interest in the Ford Tri-Motor and demand for the plane's services mushroomed. By 1929 Henry Ford's airplane factory had geared up production so that four were completed each week.

Distinguished by the corrugated aluminum skin covering, the Ford could carry ten to twelve passengers on fairly comfortable wicker seats at a cruise speed of 110 to 115 miles per hour amidst deafening noise from the engines.

The Tri-Motor could carry heavy, bulky loads and operate out of small landing strips. It found work all around the world for many years. Today, several Fords are still flying, thrilling the public with demonstration rides at air shows.

10 Aviation Innovations We'd Be Stuck on the Ground Without
Why Is 'Mayday' the International Distress Call?
Will Circular Airport Runways Ever Take Off?