by John Fuller
Prev NEXT
10 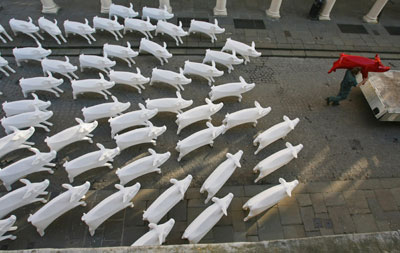 Bladud didn't just fail the world's first recorded attempt at flight, he also allegedly discovered the healing springs of Bath, England, with his pigs around 3,000 years ago. One hundred model pigs were placed around Bath in 2008 to honor him.
Matt Cardy/Getty Images

Before Or­ville and Wilbur Wright successfully flew the first heavier-than-air airplane at Kitty Hawk, N. C., in 1903, humans had been attempting flight for thousands of years. Ovid published his collection of myths, "Metamorphoses," at the very be­ginning of the first millennium, which included the tale of Daedalus and Icarus escaping the island of Crete by way of glue and feathers. Actors at Roman feasts frequently entertained simply by jumping from tall heights with nothing but feathered arms, falling to their deaths.

The very first recorded attempt at human flight, however, goes as far back as 850 B.C. to Troja Nova, or New Troy, where the legendary King Bladud made his mark on aviation history. Although there's little evidence supporting his existence, Bladud is still an important mythical figure who may have had an actual historical counterpart. According to the tales, Bladud was a great user of magic. He allegedly discovered the cure for leprosy in the city of Bath, of which many considered him the founder.

King Bladud also practiced necromancy, or communication with the spirits of the dead. Legend says he used necromancy to build a pair of wings that attached to his arms. Bladud made an attempt to fly at the temple of Apollo while wearing the wings, but the mythical figure unfortunately didn't get the right blueprints from the spirits: He fell to his death.

After his fall, he was apparently buried in Troja Nova and succeeded by his son, Lear, the very same king on whom Shakespeare based his tragic play, "King Lear." Could the sensational death of his father be the real reason King Lear went mad during his old age, raging against the wind in the forest?

To learn about a more advanced machine designed by an actual historical figure, go to the next page.