by John Fuller
Prev NEXT
3 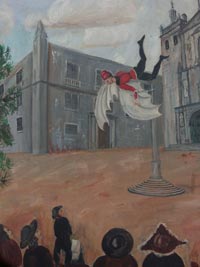 Torto demonstrated his flying apparatus for a group of onlookers.
Courtesy Museu do Ar/Portugal

The small European country of Portugal has a long history of aviation: Attempts at flight go back as early as Medieval times, and the Portuguese Air Museum dates back as far as 1909, only six years after the Wright brothers flew at Kitty Hawk, N.C.

One famous attempt, however, made the wrong kind of history, ending up in failure.

The man who took the hit for Portuguese aviation history was João Torto. A true Renaissance man, Torto was a man of many trades: He was a nurse, a barber, a certified bleeder and healer, an astrologer and a teacher.

Unfortunately, Torto a­lso had a big head about his well-rounded education, and decided he wanted another title added to the list -- aviator.

Using two pairs of calico cloth-covered wings attached to his arms and an eagle-shaped helmet, Torto jumped from the cathedral tower in St. Mateus square on June 20, 1540 at 5 p.m. (in front of a large crowd, of course) and fell a short distance to a nearby chapel.

Unfortunately, when he landed, his helmet slipped over his face and obscured his ­view. He fell to the ground, fatally wounding himself.

To read about a French fable that warned against the dangers of flight, see the next page.

Aviation has always had a large fan base in Portugal. In 1909, Portuguese aviation pioneers formed the Portuguese Air Club, a flying school to train those interested in piloting the skies. In 1910, the first airplane was seen flying in the country when the club invited French pilot Julien Marmet to give flight trials, and by 1912 Alberto Sanches de Castro became the first Portuguese pilot to fly an airplane in Portugal.