How CargoLifter's Airship Will Work

Airships, also called dirigibles, served as an alternative to transoceanic travel by boat in the early 1900s. However, the future of dirigibles as transportation vehicles ended when the Hindenburg, a giant hydrogen-filled dirigible, burst into flames over Lakehurst, N.J., in 1937. Once airplanes were recognized as safe for passenger travel, few saw a need for commercial airships.

Most airships you see today are used as flying billboards, like the Goodyear or Fuji blimps you see hovering above major sporting events. But airships may soon provide more than advertising. One German company is bringing back the mammoth dirigibles of the early 20th century to fill a niche in the transportation industry. CargoLifter AG is investing in the idea that dirigibles have an advantage over other forms of transportation. The company says that its giant CL 160 airship can reach areas that are too difficult to reach by train, truck or current cargo ships. And they can haul more cargo than even the biggest heavy-cargo-transport military airplanes.

In this edition of How Stuff Will Work, you will learn how these new airships differ from their predecessors, how they will work and just why we will need these giant transport vehicles.

It seems only appropriate that a company located just a few miles south of Berlin would be responsible for breathing new life into the airship. After all, it was German Count Ferdinand von Zeppelin who first flew a dirigible in 1900, which is how airships came to be called "zeppelins." CargoLifter's CL 160 airship design harkens back to the time of those early zeppelins; but the company has incorporated some exciting new technology.

The overall size of the CL 160 is overwhelming. Nearly three football fields in length, it can easily swallow four of Goodyear's largest blimps. The airship is 853 feet (260 meters) long and has a maximum diameter of 213 feet (65 m). While the Hindenburg was filled with hydrogen, which is flammable, the CL 160 will hold more than 19 million cubic feet (550,000 cubic meters) of non-inflammable helium gas. Here are the basic components of the CL 160:

CargoLifter hopes to have its first airship finished by 2002, with a multi-ship fleet circling the globe two years later. The company plans to build about four airships per year beginning in 2004. The ships will be manufactured in Brand, Germany. In October, the company announced that it will build a second plant in New Bern, N.C., which will be completed by 2005. 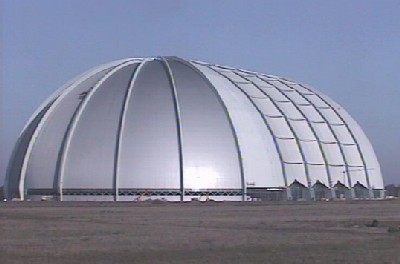 Here are some interesting facts about the hangar:

CargoLifter says the CL 160 isn't designed to take the place of other cargo transport vehicles, such as trucks, trains or airplanes. Instead, the airship will supplement those conventional means when it is necessary to get large cargo to hard-to-reach locations. The airship is equipped with a loading frame that can carry up to 160 tons (352,000 pounds / 160,000 kg).

Unloading is a little trickier. The airship is carrying a very heavy load, so if it lowers the cargo to the ground and the cargo is simply removed from the loading platform, the airship would soar into the sky due to the sudden decrease in weight. To maintain stability, the airship is equipped with a system that will pump in water to compensate for the weight of the unloaded cargo. Also, the payload is not lowered all the way to the ground. It is lowered by the winches to about 130 feet (40 m) above the ground. Cables attached to the loading platform are lowered to the ground and anchored to stabilize the loading platform. The cargo is then lowered the remaining 130 feet by cable. The entire unloading process will take about two hours.

For more information on airships, check out the links at the end of this article.