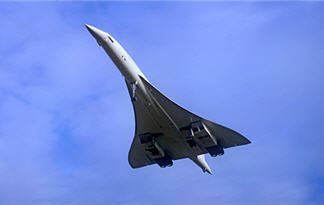 In 2003, the Concorde, the jet that took the wealthiest of air travelers from New York to London in a mere three hours, flew its last voyage after nearly three decades of commercial flights. The supersonic jet, which flew at Mach 2 (double the speed of sound) was never very profitable, and after the deadly crash of Air France Flight 4590 in 2000, enthusiasm for the aircraft waned.

But several aircraft manufacturers are betting that enough customers miss crossing the Atlantic in half the time it takes today to make supersonic flight practical and profitable, and have a variety of new designs in the works to bring Mach speeds back to commercial flight.

One of the biggest challenges facing supersonic flight is the sonic boom. The noise made by an aircraft breaking the sound barrier was onerous enough that it was prohibited over the United States and other countries, severely limiting the number of viable commercial routes.

The Aerion Corporation is designing a supersonic business jet, with new wing technology and propulsion systems. It would fly at Mach .99 over land- as fast as possible while respecting regulations. Once over the ocean, it would speed up the Mach 1.5, completing the trip from New York to Paris in just over four hours.

Aeronautics company Hypermach is taking things further by trying to eliminate or reduce the sonic boom, making supersonic flight over land a reality. Its SonicStar will feature “electromagnetic drag reduction technology” that will soften the boom, allowing it to fly at Mach 3.6 at and altitude of 60,000 feet.

Of course, there are those who point out that humans mastered supersonic flight more than 60 years ago, and that it’s time to take things up a notch. At the forefront is EADS, the owner of the Airbus, and its ZEHST: Zero Emission High Speed Transport. “High speed” is something of an understatement; the ZEHST is set to fly at hypersonic speeds: four times the speed of sound, or more than 3,000 miles per hour.

So what about the sonic boom? The ZEHST will fly above the atmosphere, so the boom would not reach the surface. It would even tackle the issue of pollution. Conventionally, supersonic aircraft burn more fuel than their subsonic counterparts, which makes sense. But the ZEHST is being designed to fly on biofuel made from seaweed. So it’s a win-win-win: no boom, no pollution, and flights from Paris to Tokyo in two and a half hours.

Of course, there’s a catch: EADS predicts that the plane won’t be available for commercial flights for at least 30 years.