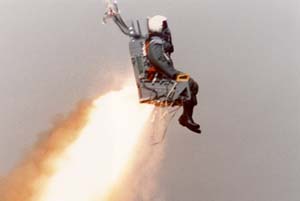 Ejecting from an aircraft is rare, but pilots sometimes have to resort to pulling the ejection handle to save their lives.
Photo courtesy U.S. Air Force

U.S. Air Force Captain Scott O'Grady was helping to enforce the no-fly zone over northern Bosnia on June 2, 1995, when a Bosnian-Serb surface-to-air missile (SAM) struck his F-16. With the plane disintegrating around him, O'Grady reached down between his knees and grabbed the pull handle of his ejection seat. After a loud bang caused by the canopy separating, O'Grady was blasted into the air along with his seat. Soon after, his parachute deployed and, like 90 percent of pilots who are forced to eject from their aircraft, O'Grady survived the ejection from his F-16. Following six days of evading capture and eating insects for survival, O'Grady was rescued.

Ejecting from an aircraft moving at speeds greater than the speed of sound (mach 1: 750 miles per hour / 1,207 kph) can be very dangerous. The force of ejecting at those speeds can reach in excess of 20 Gs -- one G is the force of Earth's gravity. At 20 Gs, a pilot experiences a force equal to 20 times his or her body weight, which can cause severe injury and even death.

Most military aircraft, NASA research aircraft and some small commercial airplanes are equipped with ejection seats to allow pilots to escape from damaged or malfunctioning airplanes. In this edition of HowStuffWorks, you will learn about the parts that make an ejection seat work, how the seat lifts a pilot out of a plane and about the physics involved in ejecting. 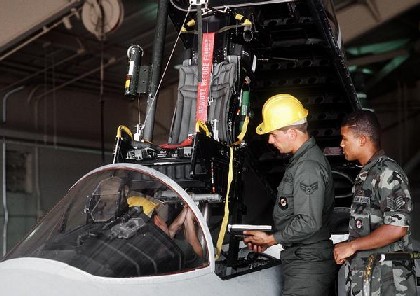 An ejection seat being removed from an F-15C Eagle
Photo courtesy U.S. Department of Defense

It's important for many types of aircraft to have an ejection seat in case the plane is damaged in battle or during testing and the pilot has to bail out to save his or her life. Ejection seats are one of the most complex pieces of equipment on any aircraft, and some consist of thousands of parts. The purpose of the ejection seat is simple: To lift the pilot straight out of the aircraft to a safe distance, then deploy a parachute to allow the pilot to land safely on the ground.

To understand how an ejection seat works, you must first be familiar with the basic components in any ejection system. Everything has to perform properly in a split second and in a specific sequence to save a pilot's life. If just one piece of critical equipment malfunctions, it could be fatal.

Ejection seats are placed into the cockpit and usually attach to rails via a set of rollers on the edges of the seat. During an ejection, these rails guide the seat out of the aircraft at a predetermined angle of ascent. Like any seat, the ejection seat's basic anatomy consists of the bucket, back and headrest. Everything else is built around these main components. Here are key devices of an ejection seat:

In the event of an ejection, the catapult fires the seat up the rails, the rocket fires to propel the seat higher and the parachute opens to allow for a safe landing. In some models, the rocket and catapult are combined into one device. These seats also double as restraint systems for the crewmembers both during an ejection and during normal operation.

Ejection seats are just one part of a larger system called the assisted egress system. "Egress" means "a way out" or "exit." Another part of the overall egress system is the plane's canopy, which has to be jettisoned prior to the ejection seat being launched from the aircraft. Not all planes have canopies. Those that don't will have escape hatches built into the roof of the plane. These hatches blow just before the ejection seat is activated, giving crewmembers an escape portal.

A pilot prepares to pull down the face curtain that will launch the ejection seat up the track of the ejection-seat trainer.
Photo courtesy U.S. Department of Defense

Seats are activated through different methods. Some have pull handles on the sides or in the middle of the seat. Others are activated when a crew member pulls a face curtain down to cover and protect his or her face. In the next section, you will find out what happens once the seat is activated. 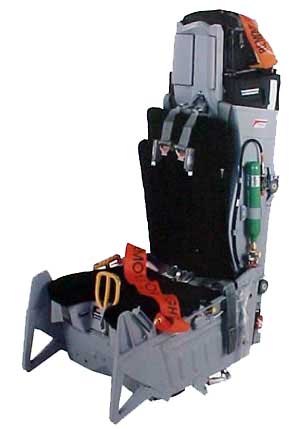 When a crewmember lifts the pull handle or yanks the face curtain down on the ejection seat, it sets off a chain of events that propels the canopy away from the plane and thrusts the crewmember safely out. Ejecting from a plane takes no more than four seconds from the time the ejection handle is pulled. The exact amount of time depends on the seat model and the crewmember's body weight.

Pulling the ejection handle on a seat sets off an explosive cartridge in the catapult gun, launching the ejection seat into the air. As the seat rides up the guide rails, a leg-restraint system is activated. These leg restraints are designed to protect the crewmember's legs from getting caught or harmed by debris during the ejection. An underseat rocket motor provides the force that lifts the crewmember to a safe height, and this force is not outside normal human physiological limitations, according to documents from Goodrich Corporation, a manufacturer of ejection seats used by the U.S. military and NASA.

The seat, parachute and survival pack are also ejected from the plane along with the crewmember. Many seats, like Goodrich's ACES II (Advanced Concept Ejection Seat, Model II), have a rocket motor fixed underneath the seat. After the seat and crewmember have cleared the cockpit, this rocket will lift the crewmember another 100 to 200 feet (30.5 to 61 m), depending on the crewmember's weight. This added propulsion allows the crewmember to clear the tail of the plane. As of January 1998, there had been 463 ejections worldwide using the ACES II system, according to the U.S. Air Force. More than 90 percent of those ejections were successful. There were 42 fatalities.

The parachutes opening on a Martin-Baker ejection seat during a test. The small parachute at the top is called the drogue parachute.
Photo courtesy NASA

Once out of the plane, a drogue gun in the seat fires a metal slug that pulls a small parachute, called a drogue parachute, out of the top of the chair. This slows the person's rate of descent and stabilizes the seat's altitude and trajectory. After a specified amount of time, an altitude sensor causes the drogue parachute to pull the main parachute from the pilot's chute pack. At this point, a seat-man-separator motor fires and the seat falls away from the crewmember. The person then falls back to Earth as with any parachute landing.

In the ACES II ejection seat produced by Goodrich Corporation, there are three possible ejection modes. The one used is determined by the aircraft's altitude and airspeed at the time of ejection. These two parameters are measured by the environmental sensor and recovery sequencer in the back of the ejection seat.

The environmental sensor senses the airspeed and altitude of the seat and sends data to the recovery sequencer. When the ejection sequence begins, the seat travels up the guide rails and exposes pitot tubes. Pitot tubes, named for physicist Henri Pitot, are designed to measure air-pressure differences to determine the velocity of the air. Data about the air flow is sent to the sequencer, which then selects from the three modes of ejections: 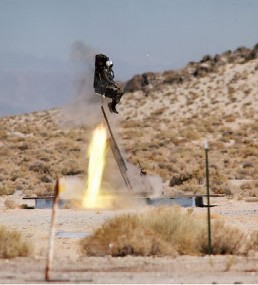 An ejection seat is test-fired at NASA to analyze the seat's ability to perform a zero-altitude, zero-velocity ejection.
Photo courtesy NASA

Ejecting from an airplane is a violent sequence of events that places the human body under an extreme amount of force. The primary factors involved in an aircraft ejection are the force and acceleration of the crewmember, according to Martin Herker, a former physics teacher. To determine the force exerted on the person being ejected, we have to look at Newton's second law of motion, which states that the acceleration of an object depends on the force acting upon it and the mass of the object.

Newton's second law is represented as:

Regarding a crewmember ejecting from a plane, M equals his or her body mass plus the mass of the seat. A is equal to the acceleration created by the catapult and the underseat rocket.

Acceleration is measured in terms of G, or gravity forces. Ejecting from an aircraft is in the 5-G to 20-G range, depending on the type of ejection seat. As mentioned in the introduction, 1 G is equal to the force of Earth's gravity and determines how much we weigh. One G of acceleration is equal to 32 feet/second2 (9.8 m/s2). This means that if you drop something off of a cliff, it will fall at a rate of 32 feet/second2.

It's simple to determine the mass of the seat and the equipment attached to the seat. The pilot's mass is the largest variable. A 180-pound person normally feels 180 pounds of force being applied to him when standing still. In a 20-G impact, that same 180-pound person will feel 3,600 pounds of force being exerted. To learn more about force, click here.

"To determine the speed of the [ejection] seat at any point in time, one solves the Newton equation knowing the force applied and the mass of the seat/occupant system. The only other factors that are needed are the time of the force to be applied and the initial velocity present (if any)," writes Herker on his Web site describing the physics for understanding ejections. Herker provides this equation for determining the speed of the seat:

Initial speed refers to either the climb or the sink rate of the aircraft. It may also be determined by the initial step of the ejection process in a seat that combines an explosive catapult and an underseat rocket. The seat speed must be high enough to allow separation of the seat and person from the aircraft as quickly as possible in order to clear the entire aircraft.

The use of an ejection seat is always a last resort when an aircraft is damaged and the pilot has lost control. However, saving the lives of pilots is a higher priority than saving planes, and sometimes an ejection is required in order to save a life.

For more information on ejection seats and related technology, see the links on the next page.

Will the FAA Ever Regulate Legroom on Commercial Planes?
What's the Difference Between Airspeed and Ground Speed?
Where does your unclaimed luggage end up?