Airline crashes are exceedingly rare events. In 2018, for example, according to the Netherlands-based Aviation Safety Network, there were 15 fatal airliner accidents, resulting in a total of 556 fatalities. But with 37.9 million flights worldwide. That works out to a rate of one fatal accident per 2.52 million flights [source: AVN].

But when a plane does go down, despite all the safety features of modern aircraft and the skill of highly-trained pilots, the flying public wants to know why it happened.

In the U.S., investigators from the Washington, D.C.-based National Transportation Safety Board (NTSB) are tasked with sifting through the wreckage, analyzing critical data from cockpit voice recorders and flight data recorders — the so-called "black boxes" — and perusing maintenance records, weather data and communications with air traffic controllers [sources: NTSB, Davies].

But even after painstaking probes, there isn't always a simple, clear answer to why these catastrophes occur. Instead, plane crashes often result from the interaction of a combination of factors, according to NTSB public affairs officer Keith Holloway.

"While the main cause of the crash was that the pilot lost control, for example, the weather could have been a factor in why that happened," Holloway says.

Harro Ranter, chief executive officer of the Aviation Safety Network, agrees with Holloway. "In most accidents, several factors are involved," Ranter says in an email. "In accident investigation, there is no such thing as a simple cause like 'pilot error.' There is always more involved."

Coming up with a list of causes is complicated, because different agencies and organizations that track crashes don't always describe them the same way. But in a 2015 article for The Conversation, British aviation safety expert Simon Ashley Bennett, director of the Civil Safety and Security Unit at the University of Leicester, listed five common causes of crashes. They're similar to the categories utilized by PlaneCrashInfo.com, a website that has amassed data on aircraft crashes since the 1920s. Here's some information on each of them.

Modern aircraft are increasingly technologically sophisticated, and their complexity can sometimes give humans more opportunities to make mistakes.

According to a 2015 article in The Conversation, aviation expert Simon Ashley Bennett said in about half of fatal crashes, errors by pilots are the primary cause of crashes [source: Bennett]. PlaneCrashInfo.com's analysis of 1,104 accidents between 1960 and 2015 puts the frequency a bit higher, at 58 percent [source: PlaneCrashInfo.com].

A study of 558 mishaps between 1983 and 2002, published in the journal Aviation Space Environmental Medicine in 2008, found that the most common type of mistake was carelessness, such as neglecting to check for hydraulic pressure for landing gear and flaps during a pre-landing checklist. That accounted for 26.3 percent of crashes ascribed to pilot error. Flawed decisions, such as making an approach to the airport from too high an altitude, accounted for 23.3 percent. Making miscalculations in dealing with forces acting on the plane accounted for 21.2 percent, while poor crew interaction contributed 11.4 percent. Mishandling wind or runways conditions happened in 7.2 percent of cases [source: Baker, et.al].

One recent example of a crash attributed to mistakes in the cockpit was Asiana Airlines Flight 214, which struck a seawall at San Francisco International Airport in 2013, causing the deaths of three passengers and numerous injuries to passengers and crew members. An NTSB investigation determined that "the flight crew mismanaged the airplane's vertical profile during the initial approach, which resulted in the airplane being well above the desired glidepath when it reached the 5 nautical mile point, and this increased the difficulty of achieving a stabilized approach," and made other mistakes as well. "The flight crew was experiencing fatigue, which likely degraded their performance during the approach," NTSB wrote [source: NTSB].

Some experts, however, have questioned whether some errors that are attributed to pilots actually are the result of their inability to overcome other systemic problems in air transportation, such as poor information and time pressure [source: DeAngelis].

The partially reconstructed wreckage of TWA Flight 800, which blew up shortly after takeoff from New York's JFK International Airport in 1996, sits in a hangar at the NTSB Training Center in Ashburn, Virginia. Alex Wong/Getty Images

The downside of advanced modern planes is that there's more technology that can break down, leading some to question whether airliners are overengineered [source: Popular Mechanics].

One particularly horrific example of a malfunctioning plane was TWA Flight 800, which exploded in midair and crashed off the coast of Long Island in 1996, killing 230 people [source: FAA]. While some have suspected a terrorist bomb or missile strike was responsible, the NTSB determined otherwise [source: Gray].

Instead, as the FAA's website explains, "the most likely scenario was a combination of a latent fault of an electronic fuel quantity indicating system component within the fuel tank, combined with a short circuit or other fault outside of the tank. This scenario would result in a high-energy electrical arc within the fuel tank that could ignite the flammable vapors" [source: FAA].

Mechanical problems also can be exacerbated by flight crew mistakes. In 1989, for example, one of the engines of a British airliner began to malfunction, according to a report by the Air Accidents Investigation Board. But the flight crew mistakenly believed that the aircraft's other engine was the one that had been damaged and shut it down instead. They didn't realize their mistake until the aircraft abruptly lost power 2.4 nautical miles (4.44 kilometers) from the runway of their destination. That led to a crash that claimed the lives of 47 passengers [source: Air Accidents Investigation Branch].

Whenever an airliner goes down in a storm, it's natural to wonder if the weather had something to do with it. It turns out, though, that weather is much more of a hazard for small planes, which have more than 20 times the rate of weather-related accidents per 100,000 hours flown compared to big jet-powered airliners, and it isn't as big a factor in airline crashes as you might suspect [source: FAA].

For airliners, a 2010 FAA study found that the most common weather factors contributing to accidents was turbulence, while wind was the second most common. Airliners didn't have much trouble with other weather conditions, such low visibility and thunderstorms [source: FAA].

One thunderstorm-related phenomenon that can be very dangerous to airliners is a microburst, a downdraft — a column of sinking air — that occurs within the storm and creates high-speed winds [source: National Weather Service]. In 1982, for example, a microburst that occurred during the takeoff of Pan Am Flight 759 from New Orleans International Airport caused the plane to crash, killing 145 occupants of the plane, was well as eight people on the ground [source: NTSB].

Sometimes, the problem with weather is how pilots choose to deal with it. Sylvia Wrigley, author of the book "Why Planes Crash," told BBC News in 2014 that she couldn't think of a crash in which weather was the sole explanation. "But there can be a situation where the weather puts the aircraft at a higher risk of going wrong," she explained [source: BBC News].

One weather-related risk is continuation bias — that is, the inclination to continue with an existing plan, even if it is inadvisable. Such bias may lead a pilot to attempt to continue on and reach the destination, rather than diverting because of weather conditions, sometimes with disastrous results [source: DeAngelis].

Not every air catastrophe is an accident, unfortunately. Bennett estimated that about 10 percent of crashes are caused by sabotage [source: Bennett]. PlaneCrashInfo.com puts the number slightly lower, at 9 percent [source: PlaneCrashInfo.com].

Intentional crashes often have been caused by bombs planted on airliners, such as the explosive device in a suitcase that the FBI says Libyan agents planted on Pan Am Flight 103, which blew up in the air over Scotland in 1988, killing 270 people [source: FBI]. Other airliners have been hijacked and deliberately crashed, such as in the September 11, 2001 attacks on the World Trade Center and the Pentagon [source: National Security Archive].

Still other airliners have been shot down, such as the Malaysia Airlines Flight 17, which was downed by pro-Russian separatists in Ukraine in 2014 [source: CNN].

There's also a rare, but even more disturbing, scenario, in which a suicidal pilot decides to take his life and those of his crew and passengers by deliberately crashing the aircraft. The Aviation Safety Network website lists 14 instances of pilot suicide-by-airliner since 1976 [source: ASN]. That compilation includes a controversial 1990 EgyptAir crash off the coast of Massachusetts that killed 217 people. The NTSB concluded that the probable cause was "the relief first officer's flight control inputs" [source: NTSB]. The U.S. investigators' conclusion was disputed by Egyptian officials [sources: NTSB, Walsh].

The remainder of accidents, about 10 percent, are caused by errors made by humans other than flight crews, such as mistakes made by air traffic controllers, maintenance engineers and others, according to Bennett [source: Bennett]. PlaneCrashInfo.com found that 10 percent of crashes are caused by "other" factors, a category in which it includes errors by traffic controllers and ground crew, improperly loaded cargo, runway obstructions and chance events such as bird strikes, among others [source:PlaneCrashInfo.com].

Mistakes in the tower can be dangerous. In 1991, for example, after a collision between a commuter plane and a jet airliner cleared to land on the same runway killed 34 people, the NTSB eventually faulted the local air traffic control management for not putting in place needed safety procedures, and was critical of the FAA for its failure to provide policy direction and oversight [sources: NTSB, Malnic].

Fortunately, controllers don't make many miscues. A 2013 FAA study found that U.S. air traffic controllers made 4,394 errors in a year in which they handled 132 million flights. Only 41 of those miscues were deemed "high risk" mistakes, but the FAA concluded that seven of them might have resulted in catastrophic accidents [source: Halsey].

Maintenance mistakes also can cause crashes. In 1985, the crash of Japan Airlines Flight 123 that killed 520 people was linked to a faulty repair performed years before. That had allowed fatigue cracks to spread and weakened the bulkhead, which eventually resulted in a catastrophic failure [source:FAA].

Learn more about airline disasters in "Bracing for Impact: True Tales of Air Disasters and the People Who Survived Them" by Robin Suerig Holleran. HowStuffWorks picks related titles based on books we think you'll like. Should you choose to buy one, we'll receive a portion of the sale. 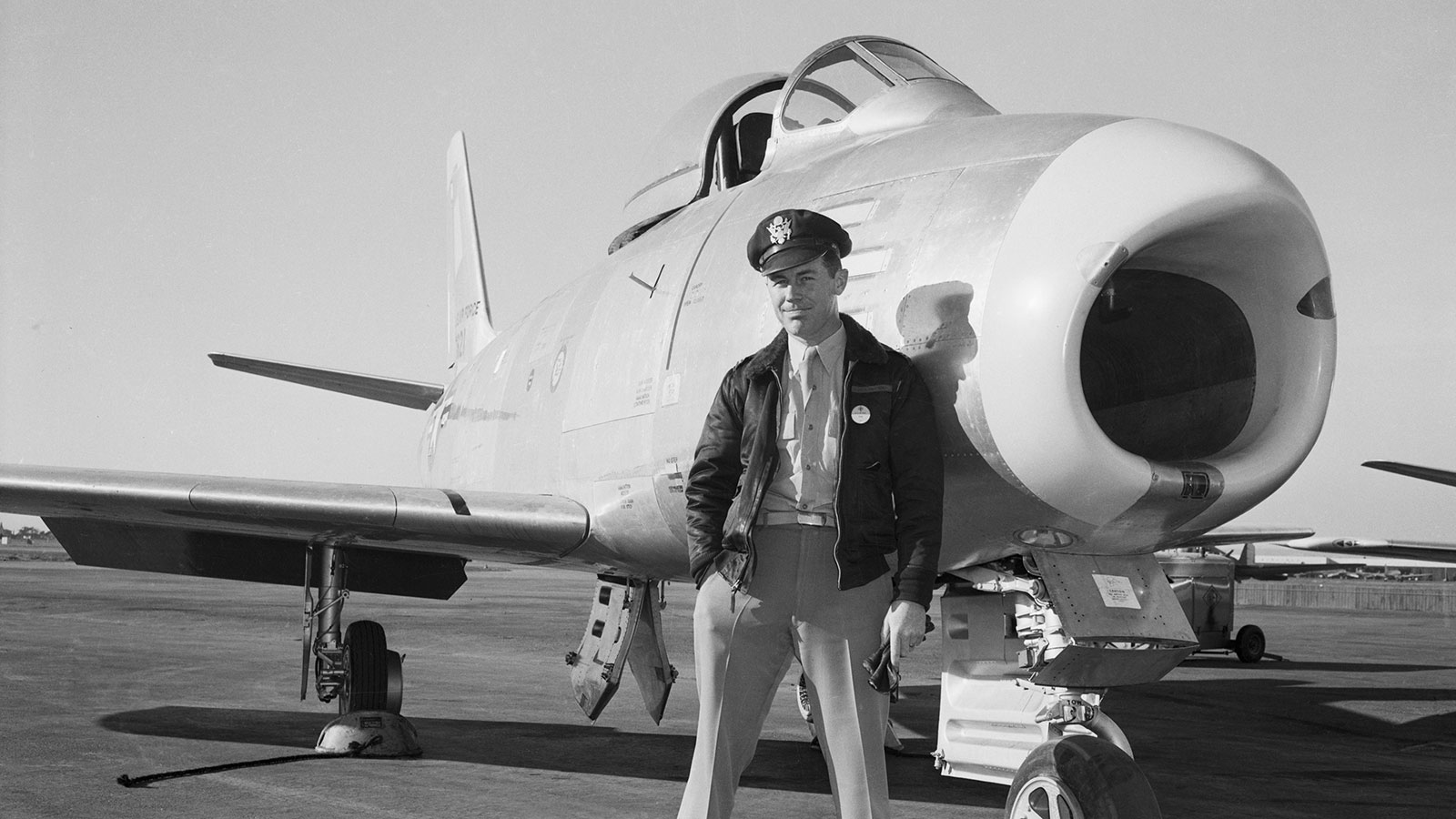 Before Yeager did it, people thought it was impossible to break the sound barrier in flight. So how did he do it? And what other amazing feats did he accomplish?

Many years ago, I was on an airliner that was descending to land at Los Angeles International Airport, when it suddenly soared back high into the air. The pilot came on the public-address system to explain that another jet was on the runway where we were supposed to land. It had been a scary moment, but I was reassured by how the pilot had spotted the problem and used his skills to keep us safe.