How to Use a Tuning Fork 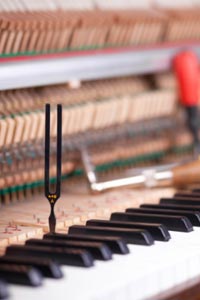 Despite the ease of technology, many piano tuners still use tuning forks.
©iStockphoto/Thinkstock

Ever heard an out-of-tune piano? The piano's strings have been allowed to fall out of tune and as a result, the keys are no longer synchronized. Normally, the keys on a piano represent the different notes of a musical scale. But without proper tuning, they're nothing more than random notes cobbled together. To hear them played together, it just sounds chaotic. A band, choir or orchestra works the same way. If the instruments or voices haven't been adjusted to play in the same tone, they'll sound no better than an out-of-tune piano. A tuning fork's job is to establish a single note that everybody can tune to.

Most tuning forks are made to vibrate at 440 Hz, a tone known to musicians as "concert A." To tune a piano, you would start by playing the piano's "A" key while ringing an "A" tuning fork. If the piano is out of tune, you'll hear a distinct warble between the note you're playing and the note played by the tuning fork; the further apart the warbles, the more out-of-tune the piano. By either tightening or loosening the piano's strings, you reduce the warble until it's in line with the tuning fork. Once the "A" key is in tune, you would then adjust all of the instrument's 87 other keys to match. The method is much the same for most other instruments. Whether you're tuning a clarinet or guitar, simply play a concert A and adjust your instrument accordingly.

It can be a bit tricky to hold a tuning fork while manipulating an instrument, which is why some musicians decide to clench the base of a ringing tuning fork in their teeth. This has the unique effect of transmitting sound through your bones, allowing your brain to "hear" the tone through your jaw. According to some urban legends, touching your teeth with a vibrating tuning fork is enough to make them explode. It's a myth, obviously, but if you have a cavity or a chipped tooth, you'll quickly find this method to be unbelievably painful.

Luckily, you can also buy tuning forks that come mounted on top of a resonator, a hollow wooden box designed to amplify a tuning fork's vibrations. In 1860, a pair of German inventors even devised a battery-powered tuning fork that musicians didn't need to ring again and again [source: Case Western Reserve University].

Of course, even the most elaborate tuning fork has little use for most modern musicians. Like most things, the humble tuning fork has been made obsolete by computers. Most musicians now carry $20 electronic tuners the size of a pack of cards. Play any note, and the tuner will automatically detect which note it is, telling you whether it's sharp or flat. A Spanish company also recently launched an app allowing musicians to tune up with nothing more than their iPhone [source: Lewin]. But whether out of caution or sentimentality, it's not uncommon for most serious musicians to keep at least one tuning fork around the house.

Read on to find why a tuning fork is responsible for your last speeding ticket.