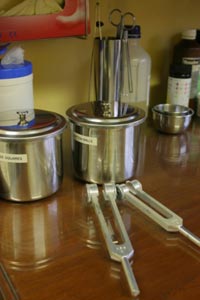 Some doctors might use tuning forks to test hearing loss.
©iStockphoto/Thinkstock

While keeping orchestras and concert bands in check, tuning forks have also found plenty of work in hospitals, research labs and police stations around the world.

When X-rays are in short supply, tuning forks can also be a makeshift way to identify whether a bone is fractured. Simply hold a ringing tuning fork close to the site of a suspected fracture. If you feel a sudden surge of pain, it's time to go to the hospital.

Over the last 15 years, tuning forks have also been getting a fair bit of attention in the world of alternative medicine. In a practice known as tuning fork therapy, a patient lies motionless on a table while a healer passes vibrating tuning forks over their body -- the idea being that the vibrations improve mental clarity and physical energy. There's no scientific evidence for this, but hanging out in a room filled with gently-humming tuning forks could put anyone in a good mood.

Ever gotten a speeding ticket? A tuning fork is partly responsible. Police radar guns measure speed by bounding a radar signal off an approaching car. Depending on how quickly the radar signal bounces back determines how fast the car is going. To calibrate a radar gun, police will aim it at a tuning fork specially designed to vibrate at 50 miles per hour (80.5 kilometers per hour). If their radar gun doesn't register 50 miles an hour, they know it's time to take it in for adjustment.

For lots more information on music and technology, give your brain a tune-up with the links below.