History of Uranium Mining: Race for the Yellowcake 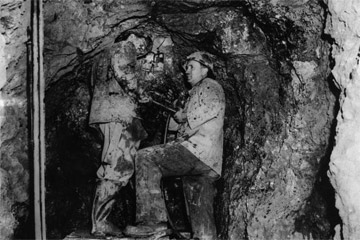 Uranium's debut as a nuclear element dates back to the top-secret Manhattan Project, through which scientists developed the first atomic bomb. In the United States, mines popped up out West in the Colorado Plateau, an area that unites the corners of Utah, Colorado, New Mexico and Arizona. This period also coincides with the Atomic Energy Act of 1946, which allowed uranium mining in the United States as long as the finished product ended up in government hands [source: Atomic Energy Commission].

One of America's natural wonders, the Grand Canyon, has also served as a battleground for uranium mining in Arizona, where parties debated the area's importance for its natural resources and tourism [source: Amundson]. In fact, amateur prospectors picked up on radioactive areas that would later be named the Orphan Mine in Grand Canyon National Park.

Certainly, World War II put uranium in the position to be a powerhouse element.

"Uranium went from being a weed to a weapon," said Michael Amundson, a historian, professor and expert on the Atomic Age. "Instead of serving as this useless pigment, it became a strategic element of the war."

But North America wasn't the only continent with an appetite for uranium. Global demand for the metal grew in the 1950s during the arms race between the United States and the Soviet Union, when the highly enriched forms of the element were used to create atomic weapons. Around the world, economic incentives and the promise of defending one's country and its allies became reasons to support the conquest for the "wonder metal."

In the 1970s, the focus on uranium shifted to its use as fuel for the growing nuclear power sector. But the glamor and promise of atomic culture wore off as free markets became the norm. Public fears surrounding the nuclear technology also grew. The Three Mile Island accident in 1979 made people even more fearful of nuclear power and dealt another blow to already struggling uranium mining operations in the United States. Today, some experts say uranium mining is on the rise again, as the global demand for the element grows [sources: Nuclear Energy Agency; Deery].

So where does the hunt for uranium begin? Hint: Probably not in your backyard.