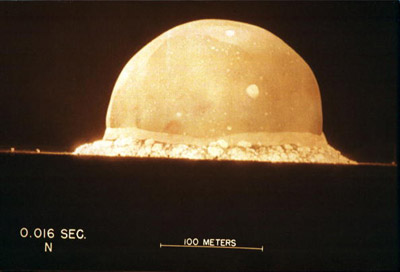 On Aug. 6, 1945, Paul Tibbets, pilot of the B-29 airplane named the Enola Gay, dropped an atomic bomb over the Japanese city of Hiroshima. Nicknamed "Little Boy," the bomb created an explosion equivalent to 15,000 tons of TNT, destroying nearly every building within a mile of ground zero and creating a massive firestorm that eventually engulfed the city. It's believed that 70,000 citizens died immediately after the blast, but the eventual death total may have reached as many as 100,000 by the end of the 1945 and 200,000 after 5 years due to the effects of radiation [source: U.S Department of Energy]. Three days later on Aug. 9 a second bomb was dropped on the industrial city of Nagasaki. Nicknamed "Fat Man," the second bomb killed about 40,000 people initially, and the death toll eventually reached 70,000 after the end of the year and 140,000 after 5 years [source: U.S. Department of Energy]. Japan surrendered to the Allied forces on Aug. 14, 1945, officially ending World War II.

The development and use of the atomic bomb, the most powerful weapon created by the human race, is viewed as one of the most important and controversial events in the 20th century. Its terrifying ability to devastate an entire city and its symbol as a source of power sparked a tense nuclear arms race between the United States and the Soviet Union after the end of the war. Modern warfare had changed dramatically at the beginning of the century -- airplanes, machine guns and biological and chemical warfare were just a few of the technological advancements that caused widespread devastation and altered military tactics. But the atomic bomb was a different story. Some people thought its existence would put an end to all war, while others feared the potential annihilation of the human race.

The Manhattan Project, the code name for the United States' secret plan to develop atomic weapons for use in warfare, was a broad designation for the people, geographic locations and resources involved in atomic research during World War II. Many were, and still are, split on the decision to use the bomb in Japan, including the very people who helped build it. Some feel it saved lives and ended World War II, while others argue the Japanese would have surrendered anyway.

It turns out there were at least 10 sites dedicated to the nuclear bomb efforts located in Manhattan, one of the five boroughs of New York City. The Army Corps of Engineers, situated at 270 Broadway, received the order to build the nuclear bomb and initially placed the project's headquarters in its own building. When authorities decided to stretch out the borders of the project in order to ensure security, the Corps still organized the construction of facilities in New Mexico, Tennessee and Washington State from its offices in Manhattan. Several other sites around New York City, including Columbia University, acted as secret research centers or uranium storehouses [source: the New York Times].