Mining: Making the Most of Radioactive Caches 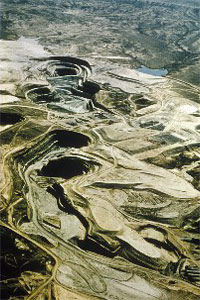 After locating uranium deposits and obtaining appropriate permits, a company will begin to mine. There are a few ways to extract uranium from the ground: open-pit mining, underground mining and in-situ recovery.

Mining methods depend on the type of deposit, whether it's suspended in water and the geography of the area. For instance, if miners find a deposit sandwiched between layers of rock and water, in-situ recovery will be a more cost-effective option. If experts deal with dry ore, they'll most likely stick with a type of open-pit or underground mining.

Uranium mines might appear expansive, but a relatively small number of workers perform duties at each site. Roughly 35 people help drill and place steel reinforcements into the ground to secure shafts with machines, 35 miners specialize in removing the uranium ore (in open-pit operations; 20 for underground) and about 25 individuals assist with the reclamation process in efforts to restore land back to its natural state [source: Deery].

Head over to the following page to find out how a slushy mixture of rock and uranium becomes nuclear fuel.