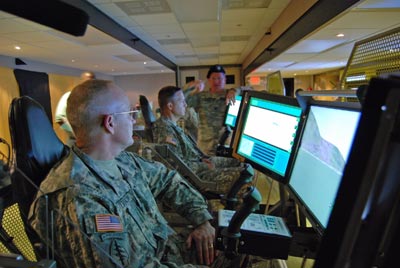 The Future Combat System simulator can recreate the experience of driving many different vehicles, even doubling as a flight simulator.
Photo courtesy of the U.S. Army, photo by Eamonn Bourke

Out of all the earliest VR technology applications, military vehicle simulations have probably been the most successful. Simulators use sophisticated computer models to replicate a vehicle's capabilities and limitations within a stationary -- and safe -- computer station.

Possibly the most well-known of all the simulators in the military are the flight simulators. The Air Force, Army and Navy all use flight simulators to train pilots. Training missions may include how to fly in battle, how to recover in an emergency, or how to coordinate air support with ground operations.

All three branches use hardware developed by the military as well as from third-party vendors. Because of this, many of the flight simulators they use are different from one another. Often, this can cause difficulty when linking systems together -- simulated enemies may not appear in the same point of space for multiple pilots, for example. Currently, there's a big push to create better networks among simulators to facilitate coordinated training missions.

Although flight simulators may vary from one model to another, most of them have a similar basic setup. The simulator sits on top of either an electronic motion base or a hydraulic lift system that reacts to user input and events within the simulation. As the pilot steers the aircraft, the module he sits in twists and tilts, giving the user haptic feedback. The word "haptic" refers to the sense of touch, so a haptic system is one that gives the user feedback he can feel. A joystick with force-feedback is an example of a haptic device.

Some flight simulators include a completely enclosed module, while others just have a series of computer monitors arranged to cover the pilot's field of view. Ideally, the flight simulator will be designed so that when the pilot looks around, he sees the same controls and layout as he would in a real aircraft. Because one aircraft can have a very different cockpit layout than another, there isn't a perfect simulator choice that can accurately represent every vehicle. Some training centers invest in multiple simulators, while others sacrifice accuracy for convenience and cost by sticking to one simulator model.

In the next section, we'll look at VR simulators for ground vehicles and submarines.

You've Got That Simulated Feeling

In order for a user to feel that a motion simulator is accurate, the simulator has to behave in a way that feels realistic and predictable. In other words, if a pilot gently guides a simulated aircraft into a turn, the motion simulator shouldn't tilt at a sharp angle, which would represent a much tighter turn. Computer scientists uses a collection of data gathered from computer models, field tests and complex algorithms to program simulators' behavior. They discovered that convincing force-feedback greatly affected the user's experience, making it seem more real and consequently a more effective training method.