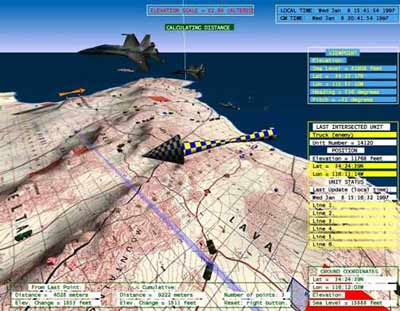 Another application of virtual environments in the military is battlefield visualization. Battlefield visualization is vital when determining combat strategies in real time. It's also a key element in the training regimen of commanding officers. It helps commanders assess their options before making decisions that could put soldiers in harm's way.

Tools like Google Earth and SketchUp make creating three-dimensional maps easy and inexpensive. Today, military officials can explore a three-dimensional model of an area, viewing it from any angle while formulating strategies and looking for potential logistical problems.

The military has explored using a VR workbench as a display technology for battlefield visualization. The viewer wears a pair of special goggles that create the illusion of depth, so that the images displayed on the workbench appear to be three dimensional. Multiple users can view the same display at once, assuming they're all wearing the special goggles.

As personal computers and graphics cards become more powerful, the need for specialized display technology decreases. Today, a high-powered laptop can meet much of the military's needs for visualization. The military has found that it can adapt many commercial software and hardware packages for its own needs. You don't get the same level of immersion when working with a personal computer as you would with a dedicated VR system, but the computers are much less expensive and easy to network.

The military also uses virtual environments to prepare soldiers for emergencies. For example, the Navy Research Laboratory has the Virtual Environment Training Technology program. In this program, the Navy trains sailors how to deal with shipboard fires using a virtual environment. The program is still in the validation process, and many Navy officials hope it will allow sailors to train in dangerous techniques in a safe, controlled environment.

To learn more about virtual reality and its applications, check out the links below.

The DARPA Tactical Language Training Project is using virtual environments to help soldiers learn how to interact with people in foreign nations. The program reinforces lessons on tactical language, which includes the set of linguistic and cultural skills needed to complete a mission. Soldiers navigate through a virtual simulation of foreign villages, where they encounter natives who are either controlled by a teacher or a computer.