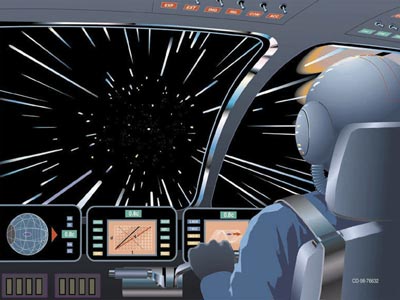 ­Onboard the starship Enterprise, you're hanging out with the crew members, enjoying a game of poker. You're traveling at impulse speed during a leisurely deep-­space exploration, and everyone has some downtime. But wait -- all of a sudden, the ship receives an urgent message from a Federation admiral, informing th­e crew of an outbreak of war in the Neutral Zone. The Enterprise is ordered to report to the situation as soon as possible. The area in question is about 20 light years (117 trillion kilometers) away, but this is no problem in the "Star Trek" universe. The captain adjusts the ship's warp drive appropriately, and you settle in for warp speed. Traveling faster than the speed of light, you should arrive to your destination in just a few minutes.

­For as long as humans have looked up to the skies, space has fascinated us, and astronomers and philosophers alike have asked the most fundamental questions while staring at the stars. What are we doing here, anyway? How did the universe begin, and are there other, parallel universes that mirror ours? Is there life out there in other galaxies, and what would it be like to travel there?

While we haven't quite answered these questions yet, we at least have science fiction like "Star Trek" to test the human imagination. Everything from H.G. Wells' "The Time Machine" to "Star Trek" to Joss Whedon's "Firefly" series has touched on the possibilities of time travel, teleportation and, of course, warp speed. But how does something like warp speed fit into reality and our universe? Is warp speed just a wacky science fiction device, or is it theoretically possible? How does it work in the "Star Trek" universe? For everything on warp speed, infinity and beyond, read the following pages.