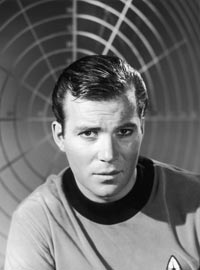 Hulton Archive/Getty Images
"Star Trek" had William Shatner as Captain James T. Kirk, but whatever were they going to do about intergalactic space travel?

When the writers of "Star Trek" sat down to plan the series, they found themselves confronted with a few problems. They were essentially creating a space opera, a subgenre of science fiction that takes place in space and covers the span of several galaxies and millions of light years. The "Star Wars" films are another example of the space opera subgenre. As the "opera" part of the name suggests, a show like "Star Trek" isn't meant to be slow or ordinary -- when people think of the series, they probably think of melodramatic plots involving aliens, space travel and action-packed laser fights.

So the creator of the series, Gene Roddenberry, and the other writers had to find a way to move the show's characters around the universe in a timely, dramatic fashion. At the same time, they wanted to do their best to stick to the laws of physics. The biggest problem was that even if a starship could travel at the speed of light, the time to go from one galaxy to another could still take hundreds, maybe thousands of years. A journey from the Earth to the center of our galaxy, for example, would take about 25,000 years if you were to travel just under the speed of light. This, of course, wouldn't make very exciting television. 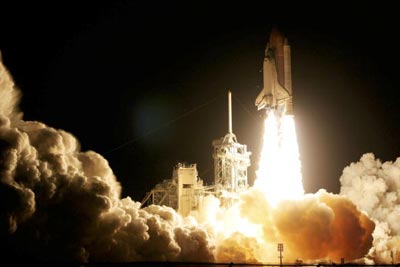 Eliot J. Schechter/Getty Images
When this shuttle makes its way into orbit, it will travel at about 17,000 miles per hour. Humans can withstand this velocity in this type of shuttle, but if the shuttle even attempted to approach the speed of light, the effect would prove fatal to astron

The first obstacle the writers had to confront is much simpler than you'd think. One of the most important things you need to know before understanding warp speed is actually one of the oldest tricks in the physics book, Newton's Third Law of Motion. You've probably heard it before -- this law states that for every action, there is an equal and opposite reaction. It simply means that for every interaction between two objects, a pair of forces is working on both of them. For instance, if you roll one billiard ball straight into another one that's at rest, they will both exert an equal force on each other. The moving ball will hit the ball at rest and push it away, but it will also be pushed back by the latter.

You feel this law come into play every time you accelerate in a car or fly in an airplane. As the vehicle speeds up and moves forward, you feel pressure on your seat. The seat is pushing on you, but you're also exerting a force against the seat.

So what does this have to do with "Star Trek" and the Enterprise? Even if it were possible to accelerate to something like half the speed of light, such intense acceleration would kill a person by smashing him against his seat. Even though he'd be pushing back with an equal and opposite force, his mass compared to the starship is just too small -- the same kind of thing happens when a mosquito hits your windshield and splatters. So how can the Enterprise possibly go faster than the speed of light without killing the members on board?

In the next section, we'll see how the "Star Trek" creators began to get around the problem of sending matter through space at superluminal speeds.