Are we looking for aliens in the wrong places? 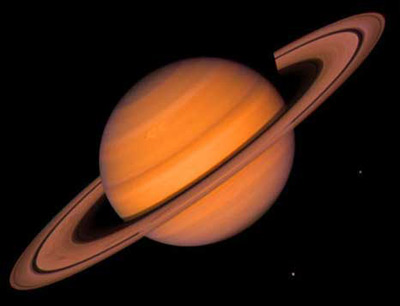 Helix-shaped plasma crystals, which may be a form of so-called "weird life," could potentially be found in the rings of Saturn.
Image courtesy NASA

The universe is filled with massive clouds of dust. From past studies, scientists have learned that this cosmic dust can, in the presence of plasma, creates formations known as plasma crystals. An international team of researchers published a study in the Aug.14, 2007, issue of the New Journal of Physics that indicates that these crystals may be more sophisticated than anyone realized. In simulations involving cosmic dust, the researchers witnessed the formation of plasma crystals displaying some of the elementary characteristics of life -- DNA-like structure, autonomous behavior, reproduction and evolution.

Before we get into how it works, let's talk about plasma. Plasma is the fourth state of matter. When gas is superheated, electrons are torn from atoms and become free floating. The gas then becomes ionized, carrying a positive charge. This superheated mix of ionized gas and free-floating electrons makes up plasma. Stars are mostly plasma, as is about 99 percent of the matter of the universe, though plasma is much less common on Earth, where we're used to dealing with solids, liquids and gases. Besides being found in stars and in our sun, plasma is transported by solar winds and magnetic fields, often coming into contact with dust clouds like those the researchers studied.

When plasma comes into contact with a dust cloud, dust particles gather an electric charge by sucking up electrons from the surrounding plasma. This core of electrons in turn pulls in positively charged ions, forming plasma crystals. In the scientists' simulations, which were performed on the International Space Station and in a zero-gravity environment at a German research facility, the plasma crystals sometimes developed into corkscrew shapes or even the double-helix shape of DNA. These helix-shaped crystals retain an electric charge and show what the researchers called a self-organizing ability.

Once in helix form, the crystals can reproduce by diving into two identical helixes, displaying "memory marks" on their structures [source: New Journal of Physics]. The diameter of the helixes varies throughout the structure and the arrangement of these various sections is replicated in other crystals, passing on what could be called a form of genetic code.

They even seem to evolve. The formations become sturdier over time as weaker structures break down and disappear.

The researchers want to test whether dust clouds in a non-simulated environment, such as those in Saturn's rings, form helixes and exhibit these behaviors. But the plasma crystals are fragile and difficult to test. They also require a consistent flow of plasma or else they "die."

If they exist in the simulated form, the researchers believe that the crystal organisms could be found in the rings of Uranus and Saturn, which are made up of small grains of ice.

So they form DNA-like shapes, reproduce, pass on their structure or genetic code, "eat" plasma, evolve and die. But are these supposed organisms a real life form? We tackle that question on the next page.

In July 2007, a group of American scientists, in association with the National Research Council, issued a report recommending that scientists search for so-called weird life on other worlds, in space and even on Earth. Weird life is believed to be far different from life forms we're used to seeing. Weird life may be organisms that don't depend on water or that don't have DNA at all. Some people even believe that weird life existed on Earth in the ancient past and that it may still exist on this planet. In reality, scientists don't know what weird life is, but its presence has many reexamining notions of what alien life may be and where it might be found.

Whether or not the plasma crystals are an example of weird life is difficult to determine. Some of the questions regarding these potential organisms come back to the debate about what life is. For example, on Earth, we consider life to be carbon-based and dependent on the presence of water. Life forms also perform certain basic functions, like reproducing, evolving and metabolizing. But even using those functions as a classification can be tricky. David Grier, a physics professor at New York University, told New Scientist that "there is no mathematically rigorous definition of life," which makes it difficult to call these crystals "alive" [source: New Scientist Space].

Gregor Morfill, one of the experiment's participants, said that while the crystals contain a lot of the "hallmarks" of life, they're still "just a special form of plasma crystal" [source: New Scientist Space]. Another of the researchers, V.N. Tsytovich, said that the clusters have "all the necessary properties to qualify them as candidates for inorganic living matter" [source:Science Daily]. The researchers also stated that while they're not ready to confidently state that these structures represent a new form of life, their study should add to the discussion of how scientists define life [source: USA Today].

If the plasma crystals do exist in their simulated form, they live and develop at a pace at least a hundred thousand times slower than Earth's biological organisms. The question is then raised: given their fragility and slow pace of development, can they become intelligent or sentient?

If they are considered life, it may mean that these organisms are the most common life form in the universe, given the prevalence of plasma and massive interstellar dust clouds. There has also been some suggestion that these inorganic life forms somehow spurred development of organic life on Earth.

For more information about plasma crystals, alternative forms of life and other related topics, please check out the links on the next page.

Another Theory of Life

Silicon-based life forms are another possible form of alien life. These hypothesized life forms are often depicted in science fiction movies, TV shows and books. Like carbon, silicon can form a lot of complex compounds, but among its many disadvantages is an inherent instability. Silicon is also far less common than carbon in the known universe.