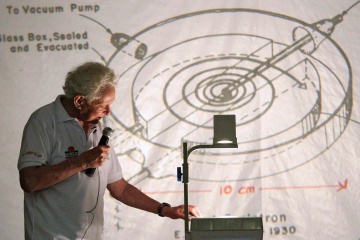 Sure, the Standard Model is nice, but physicists aren't content to leave it at that. Here, Leon Lederman (he of the 1986 Nobel Prize in physics) addresses the World Summit on Physics Beyond the Standard Model in 2006.
Rodrigo Buendia/AFP/Getty Images

Faster than a speeding bullet! More powerful than a locomotive! Able to leap tall buildings in a single bound! Why, it's supersymmetry of course. (SUSY, if you prefer its cuter, incognito personality.) Of all the superheroes we have in the universe, supersymmetry might be the one that will save us from total annihilation. Not because it fights bad guys or outwits villains, but because it just might explain how the tiniest, most elementary parts of the cosmos work. Unlock the universe, and who knows what we can defend ourselves against.

Who is our clever hero? Our muscled heroine? Well, it's more mousy Peter Parker than suave Spider-Man. It's actually a principle -- conceived to fill in the holes of another framework -- that physicists are beginning to fear is not half as strong as it seems. Supersymmetry may have finally met its match, and the Large Hadron Collider is the arena where it just might take its last gasp.

First, a step back. The Standard Model is what physicists today use to understand the rudiments of the universe. It defines the fundamental particles, as well as the four forces that interact with the particles to keep the universe chugging along. These particles include quarks and leptons: You might be familiar with protons and neutrons from the quark family, and electrons and neutrinos as leptons. The forces are strong, weak, electromagnetic and gravitational.

The Standard Model also says that each of those forces has a corresponding particle (or boson). By exchanging bosons with each other, matter can transfer energy between each other [source: CERN]. And here's something really convenient: Every particle in the Standard Model has been found, including -- not too long ago -- the Higgs boson. The Higgs makes up a larger Higgs field, which transfers mass to particles.

Now here's a weird thing. If the Standard Model is correct, it means that the Higgs field gives subatomic particles their mass. But it doesn't say what the masses are, nor does it explain why the Higgs boson would be light -- it should be really, really heavy if the other Standard Model particles are interacting with it the way it's predicted.

How can that balancing act be? Supersymmetry says that every particle described in the Standard Model has a superpartner with a different mass. So every known matter particle (or fermion) has a force particle (or boson) and vice versa. An electron is an example of a fermion, while a photon is an example of a boson. One of the most useful properties of the superpartners would be that they would actually cancel out the really, really big mass that the Standard Model predicts the Higgs would have. Which sounds terrific, because hey -- we found the Higgs, and it wasn't that massive. Supersymmetry is alive! Viva la supersymmetry!

Uh, but you might want to wait on that because herein lies a big problem with supersymmetry and the superpartners: We haven't seen them. While it's great to find the Higgs at the mass supersymmetry predicts, we really should be seeing all these superpartner particles, too. And after running the Large Hadron Collider for years, we haven't.

Yeah, yeah, it's a little hard to justify hanging on to supersymmetry. We're assuming that all these superpartners exist because the Standard Model would just make more sense if they do. Seems like bad science, right?

Well, not so fast. Supersymmetry would answer more than just the Higgs question, and being able to solve multiple problems with one solution is appealing to scientists [source: Fermilab]. For example, physicists didn't understand why galaxies spin as fast as they do, given their significant mass, so they posited a new matter -- dark matter -- to solve the problem. Then they encountered a bigger problem: If dark matter exists, what in the world is it made of? We'd never seen it, so we couldn't say what composes the mysterious stuff. Supersymmetry solves that problem, because the lightest supersymmetric particle would totally fit the dark matter bill.

Another boon that supersymmetry would provide? That the three forces we understand on a subatomic scale (strong, weak and electromagnetic) could be understood as part of one unifying force. While the Standard Model says that the forces become similar at very high energies, supersymmetry would predict that the three forces unify at a single energy [source: Fermilab]. Now, this isn't necessary to make "sense," but -- as we said -- physicists like natural, elegant solutions. Supersymmetry would create just the kind of solution physicists crave when it came to the question of unifying forces.

Yet again, we must be reminded that all of this is for naught if we don't find those superpartners. If we can't find them, we don't have any explanation for the Higgs boson mass, the dark matter or the unification of forces. But we're calling the time of death on supersymmetry before we've given it a chance to fight.

Because hope might be on the way, in the form of a massive proton explosion. That's right, our hopes still lie with the Large Hadron Collider, the particle accelerator that was responsible for finding evidence of the Higgs boson in 2012. While finding the Higgs was no doubt a big deal for supersymmetry supporters -- and physicists in general -- what they were really hoping for was to find a bunch of particles. More specifically, a bunch of those elusive superpartners that would lead us to understand that supersymmetry is realistic.

It's not overstating it to say that finding only the Higgs (and not any other superpartners) at the LHC has posed a bit of a crisis in the physics world. After all, for the Higgs mass to make sense, the superpartners should've been found in roughly the same spot [source: Wolchover]. The LHC is set to turn on again in 2015, crashing protons at even higher energies to hopefully find superpartners at higher masses. Unfortunately, that doesn't quite solve the problem: Even if they do find mass-heavy superpartners, the very convenient effects of supersymmetry -- that it would cancel out the super heavy mass of the Higgs -- wouldn't quite work as well [source: Wolchover]. So we'd, yet again, be stuck in a supersymmetry rut.

But as folks have noted, supersymmetry is a principle, not a theory. In some supersymmetric scenarios, the Large Hadron Collider couldn't have spotted the superpartners, due to limitations of the experiments, and their inability to detect less stable particles [source: Wolchover]. So while supersymmetry probably needs to run gasping into the room fairly quickly with a pretty good excuse for being so late, it's not yet time to shut the door.

Author's Note: What is supersymmetry?

These MIA superpartners are really starting to freak out some physicists. It would be a really big deal if we never saw them, because particle physics desperately needs testable theories. With no superpartners -- or at least, no way to verify them in our universe -- we'd have to find some other testable solution to some of the Standard Model holes.