At times, it's the little things that drive you crazy. By the early 20th century, physicists seemed to have the universe pretty well sewn up, between Newtonian gravity and Maxwell's electromagnetic equations. There was just one nagging problem: how to explain radioactivity. Addressing it sparked a scientific revolution that revealed the amazing truth about little things: Sometimes they contain universes.

Particle physics and quantum mechanics, the sciences of the truly tiny, brought physics two more fundamental forces and a menagerie of strange elementary particles, but after the 1970s little remained but to test and refine the dominant theory, the standard model. Another 30 years' worth of subatomic specks churned out by accelerators and colliders filled key blanks, yet many questions remained: Why did some particles have mass while others didn't? Could we unify the four fundamental forces or make general relativity and quantum mechanics get along?

Would one of these dangling threads spark another revolution? Finding out would take a bigger, more powerful particle collider than ever before, a 16.8-mile (27-kilometer) ring of superconducting magnets colder than outer space, capable of slamming particles together at near light speed in an ultrahigh vacuum. On Sept. 10, 2008, this $10 billion Large Hadron Collider (LHC), the collaborative effort of hundreds of scientists and engineers globally, joined the European Organization for Nuclear Research (CERN) campus of accelerators and soon broke particle collision records.

Let's look back at what we've learned so far, starting with the most famous discovery of all.

In our macro world, we assume all particles have mass, however small. But in the micro world, electroweak theory,which ties the electromagnetic and weak forces into one underlying force, predicts that special particles called mediators should have no mass at all; which is a problem, because some of them do.

In 1964, physicist Peter Higgs of the University of Edinburgh and the team of François Englert and Robert Brout of the Free University of Brussels independently proposed a solution: an unusual field that conveyed mass based on how strongly particles interacted with it. If this Higgs field existed, then it ought to have a mediator particle, a Higgs boson. But it would take a facility like the LHC to detect it.

In 2013, physicists confirmed that they'd found a Higgs boson with a mass of roughly 126 giga-electron volts (GeV) -- the total mass of about 126 protons (mass-energy equivalence lets physicists use electron volts as a unit of mass) [sources: Das]. Far from closing the books, this opened up whole new areas of research into the stability of the universe, why it seems to hold so much more matter than antimatter, and the composition and abundance of dark matter [sources: Siegfried].

It detects quarks! The late theoretical physicist Nathan Isgur displays a model of part of a machine for observing the behavior of quarks. The price tag (back in 1981) was $83 million. Ron Bull/Toronto Star via Getty Images

In 1964, two researchers struggling to make sense of hadrons -- subatomic particles affected by the strong force -- individually came up with the idea that they were made up of a constituent particle with three types. George Zweig called them aces; Murray Gell-Mann dubbed them quarks and labelled their three types, or flavors, as "up," "down" and "strange." Physicists would later identify three other quark flavors: "charm," "top" and "bottom."

For many years, physicists divided hadrons into two categories based on the two ways that quarks made them: baryons (including protons and neutrons) were composed of three quarks, whereas mesons (such as pions and kaons) were formed by quark-antiquark pairs [sources: CERN; ODS]. But were these the only possible combinations?

In 2003, researchers in Japan found a strange particle, X(3872), that appeared to be made of a charm quark, an anticharm and at least two other quarks. While exploring the particle's possible existence, researchers found Z(4430), an apparent four-quark particle. The LHC has since discovered evidence for several such particles, which break -- or at least substantially bend -- the established model for quark arrangements. Such Z particles are fleeting, but may have thrived for a microsecond or so following the Big Bang [sources: O'Luanaigh; Diep; Grant].

A worker stands below the Compact Muon Solenoid (CMS), a general-purpose detector at the LHC. Some physicists have had high hopes that the detector would uncover evidence to bolster SUSY. Fabrice Coffrini/AFP/Getty Images

Theorists advanced supersymmetry, nicknamed SUSY, to deal with several nagging issues the standard model left unanswered, such as why some elemental particles have mass, how electromagnetism and the strong and weak nuclear forces might once have tied together and, possibly, what dark matter is made of. It also established a tantalizing relationship between the quarks and leptons that make up matter and the bosons that mediate their interactions. Like the baryons mentioned earlier, leptons (such as electrons) belong to a group of subatomic particles called fermions which have opposing quantum properties to bosons. Yet, according to SUSY, every fermion has a corresponding boson, and vice versa, and each particle can transform into its counterpart [sources: CERN; Siegried].

If true, SUSY would mean that the two elemental particle types (fermions and bosons) are merely two sides of the same coin; it would remove certain runaway infinite quantities that crop up in the mathematics by letting corresponding particles cancel out; and it would make room for gravity -- a glaring omission in the standard model -- because fermion-boson and boson-fermion conversions might involve gravitons, the long-theorized gravity force-carriers.

Physicists hoped that the LHC would either find evidence to support SUSY or reveal deeper problems that would point toward new theoretical and experimental territory. So far, neither appears to have happened, but don't count supersymmetry out just yet. SUSY exists in many versions, each linked to particular assumptions; the LHC has merely sifted out some of the most elegant and likely varieties.

When scientists calibrating LHC instruments skipped the usual proton-proton collisions and opted instead to ram protons into lead nuclei, they noted a surprising phenomenon: The random paths that the resulting subatomic shrapnel usually took had been replaced by an apparent coordination.

One theory advanced to explain the phenomenon says that the impact created an exotic state of matter called quark-gluon plasma (QGP), which flowed like liquid and produced coordinated particles as it cooled. Both Brookhaven National Laboratories and the LHC have previously created QGP -- the densest form of matter outside of a black hole -- by colliding heavy ions like lead and gold. If QGP from a proton-lead collision proves possible, it could significantly affect ideas how scientist view conditions immediately following the Big Bang, when QGP had its brief heyday. There's just one problem: The collision should not have had enough energy to churn out the hypothesized quark soup [sources: CERN; Grant; Roland and Nguyen; Than].

Although most physicists favor this idea despite its problems, some have argued for a second explanation involving a theoretical field created by gluons, the particles that mediate strong force and paste quarks and antiquarks into protons and neutrons. The hypothesis says that gluons zipping along at near light speed form fields that cause them to interact. If correct, this model could provide valuable insights into proton structure and interaction [sources: Grant].

Six hundred million particle collisions per second can generate a lot of data and, consequently, analysis. It's probably safe to say that LHC data will yield many more surprises. Fabrice Coffrini/AFP/Getty Images

As illogical as it might sound, many physicists hoped that the LHC would poke a few holes in the standard model. The framework has problems, after all, and maybe an earthshaking discovery or two would confirm supersymmetry, or at least point toward new avenues of research. As we mentioned, though, the LHC has dealt repeated blows to exotic physics while reconfirming the standard model at every turn. Granted, the results are not all in (there's an awful lot of data to analyze), and the LHC has yet to hit its full energy of 14 tera-electron volts (TeV). Nevertheless, chances don't look good for making the standard model look bad.

Or maybe they do, if a 2013 report on B-meson decay is any indication. It shows B-mesons decaying into a K-meson (aka a kaon) and two muons (particles similar to electrons), which wouldn't raise any eyebrows, except that the decay followed a pattern not predicted by the standard model. Unfortunately, the study currently falls below the dancing-in-our-lab-coats threshold. Still, it's high enough to raise hopes, and analysis of additional data could inch it from the red zone to the end zone. If so, the odd pattern of decay could offer the first glimpse of the new physics so many are looking for [sources: Johnston; O'Neill]. 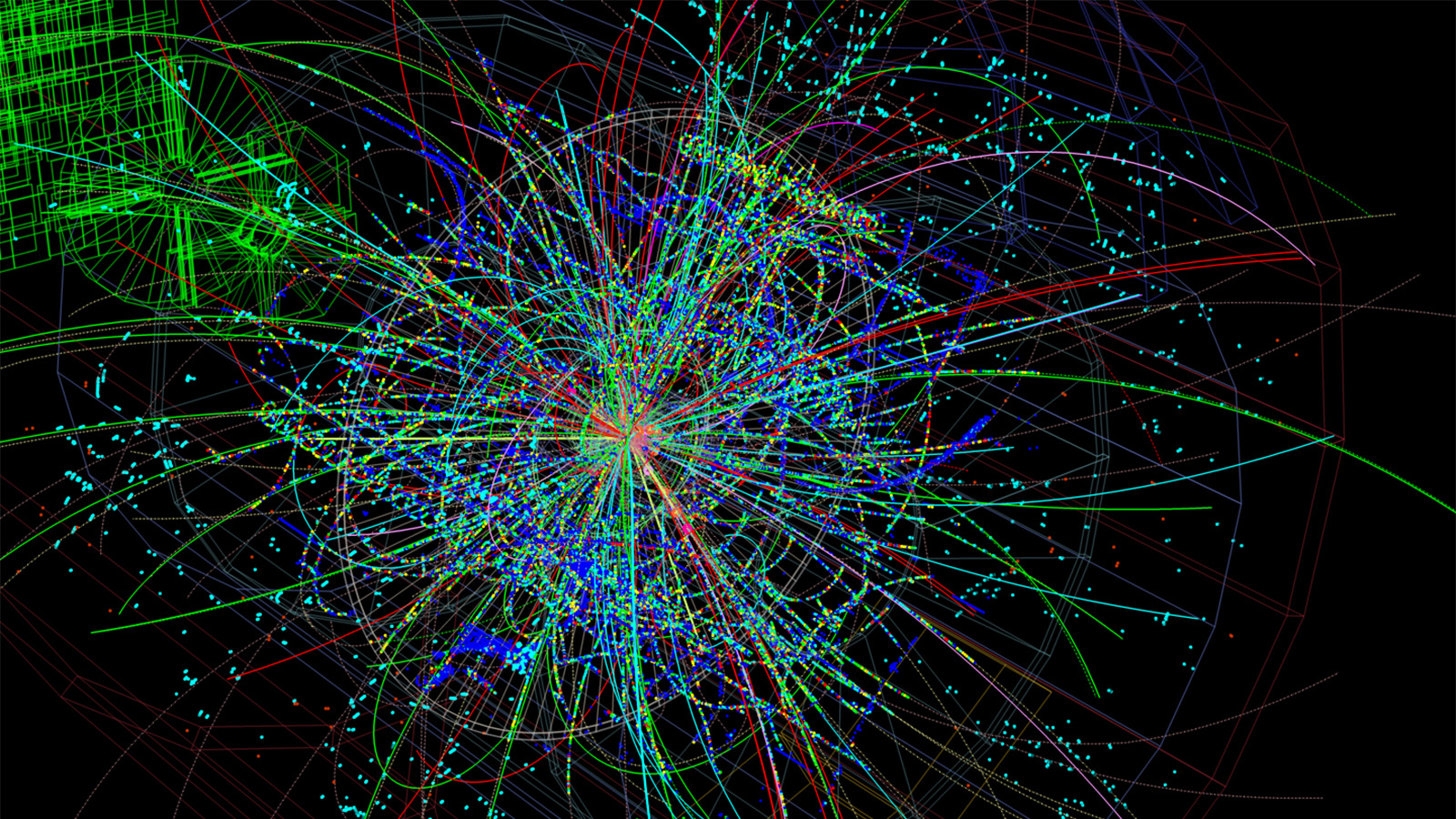 Author's Note: 5 Discoveries Made By the Large Hadron Collider

Following the completion of the LHC, some wondered what it would mean for physics if the Higgs boson failed to show up. It wasn't just the massive atom-smasher's primary raison d'être; it was a sort of lynchpin for the standard model.

Now there's a bigger problem, and it involves the cosmic background radiation measurements made by the second generation of the Background Imaging of Cosmic Extragalactic Polarization (BICEP2). If BICEP2's observations prove correct, then the Higgs field should have been energetic enough during the Big Bang to cause an immediate Big Crunch. In other words, if both ideas hold true, then we shouldn't be here to argue about why they can't possibly both be true.