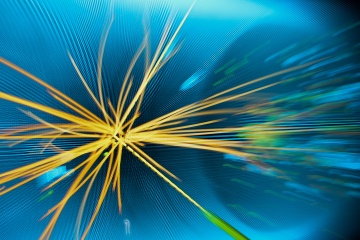 Nope, not the Higgs, but this graphic does capture traces of proton-proton collisions. (And hey, it looks cool, too.)
Fabrice Coffrini/AFP/Getty Images

In July 2012, the whole world came face to face with the Higgs boson: a sparkly, little light that danced across our screens like Tinker Bell. Wait, that's not right.

While physicists jumped for joy to "see" the Higgs boson -- that elusive particle that composes the Higgs field, which allows particles to gain mass -- the truth is that they actually saw a whole bunch of numbers, graphs and general data that told them that the Higgs boson was detected. And even saying that it was "detected" deserves some explanation.

So if scientists at CERN (the European Organization for Nuclear Research) weren't expecting to see something that resembled a prop in a stage production of "Peter Pan," what were they looking for? For a long time, physicists were puzzled by the fact that particles like electrons and quarks had mass. They weren't body-shaming the little guys that make up atoms and molecules; it was just that their mathematical representations of a symmetrical universe didn't really work unless the particles were massless [source: Greene].

Peter Higgs and some of his fellow physicists had an idea. Instead of trying to figure out how all these equations could be modified and designed to work with mass-laden particles, why not keep the math and add the assumption that the particles are operating in a field that exerts a drag on them? If that was the case, we might find a substance in this "field" that adds mass to a particle by creating resistance. Imagine a fly buzzing through the air; it's zipping along just fine until it encounters a strong headwind. Suddenly, our speedy, little fly feels quite heavy. So it would be with our particles when they slogged through the Higgs field.

Of course, physicists weren't exactly looking for some sort of universal maple syrup that we'd all been swimming in without noticing. Rather they were searching for particles that might make up a Higgs field, and they thought their search might be successful if they could just recreate the conditions right after the Big Bang. In those conditions, we can see how things like quarks and leptons flew about and if something like the Higgs boson also was created to provide the mass that allows them to clump into composite particles like protons [source: STFC].

The Large Hadron Collider is like a NASCAR track for swarms of racing protons (and some heavy ions, too). Those protons zip in opposite directions around the nearly 17-mile (27 kilometer) circle and run into each other millions of times a second [source: Greene]. When they do collide, the composite particles spray out into their smaller parts -- quarks and leptons. The energy that's created can allow us to see really, really heavy particles created in the collision.

Here's where we start to "see" things like the Higgs boson. The detectors in the LHC measure the energy and charge of the particles that firework out from the proton collisions. The detectors are no shrinking violets -- the biggest one at the LHC is 82 feet (25 meters) tall and equally wide. They need to be that big because gigantic magnets are used to curve the path of particles

If we curve the path of the particles within a magnetic field, we can see how they react differently -- some with really high momentum will still go in a straight line, those with lower momentum will spiral tightly [source: CERN]. So momentum is one helpful piece of information that researchers and physicists can study when puzzling over the identity of a particular particle.

Tracking devices in detectors are handy, too. A tracking device records electronic signals that particles leave behind as they whiz through the detector, which in turn allows a computer to make a graphical representation of the particle's path.

So what does the Higgs boson look like? Well, hate to disappoint, but the whole point is that we can't see it. It's a little particle, man. Don't be crazy. What we see instead is, well, graphs. And data. All that noisy data detailing particle path, energy, decay products and more were swept up in the detectors and synthesized into cold, hard numbers. Those numbers indicated that an "excess of events" took place that indicated the Higgs existence [source: CERN].

Now don't be too disappointed. The nice folks at CERN know what we want: pretty pictures that show a representation of the Higgs boson. If you do want to see a graphical simulation of the collisions, check out the CERN website for some (very satisfying) representations of what Higgs "looks" like in action [source: CERN].

Author's Note: What does the Higgs boson look like?

When imagining the Higgs, I think it's fair to say that I pretty much imagine a drop of maple syrup that makes up the syrupy Higgs field. It's not accurate, but it does make me think a lot about particle physics eating breakfast every weekend.

ITER Nuclear Fusion Plant Is Halfway Finished
Can supersymmetry and the multiverse both be true simultaneously?
What would nuclear winter be like?