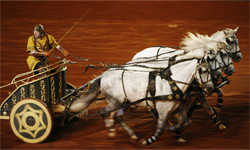 ­Before the advent of the chariot, men fought wars on foot. Soldiers packed into block formation and fought each other with stabbing and slashing weapons. Think of the chariot as an ancient tank. It revolutionized war by becoming the first moving vehicle on the battlefield.

The first chariots, appearing around 3000 B.C. in Mesopotamia, were dreadfully slow and so heavy that only oxen could pull them [source: Cotterell]. Being impractical for battle, kings rode the solid wooden carts to the battlefield, then got out and fought.

But around 1800 B.C., chariots changed, shedding weight and adding spoked wheels [source: Cotterell]. The best of these were so light that a charioteer, or driver, could lift it over his head. An archer and driver rode together on the back of the chariot, which was drawn by horses. The chariot became a fast war machine.

These advanced chariots meant trouble for foot soldiers. Charioteers blazed past infantries, riddling soldiers with arrows or running right over them.

"Chariots were the superweapons of their age," says military historian Dr. Alex Roland. "They trumped everything else and became the decider of warfare." Chariots spread from West Asia and Egypt to India, China and Europe. States that had the money built thousands of chariots, which dominated warfare in the Middle East between 1800 and 1200 B.C. [source: Roland].

Not only did chariots change the military game, they became a game for the Greeks and the Romans, and of course, Ben Hur.

­What military technology did the Chinese use as a slightly toxic remedy for ringworm? Find out next.