by Susan L. Nasr
Prev NEXT
7 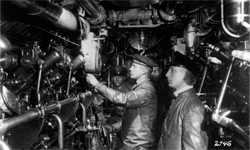 ­Since it's hard to imagine how this ubiquitous, behind-the-scenes technology made a difference, imagine war without it. On land, we would have no tanks or supply trucks. In the air, we would have no airplanes, ballistic missiles, jets or helicopters. At sea, we would have no submarines. All of these vehicles require the power generated from burning fuel.

The internal combustion engine altered the speed and range of war, starting in World War I and continuing today. During World War I, machine gunners on the front lines had to wait for horse-drawn wagons to bring their ammunition from railheads, until supply trucks made the link [source: van Creveld] . In World War II, the Germans famously drove tanks up to 60 miles (97 kilometers) a day to gain territory from the edge of Poland to Moscow in six months [source: van Creveld]. One of the first ballistic missiles, the German V-2, sped up war even more since it could destroy a target 200 miles (322 kilometers) away in five minutes [source: Parson].

Without the internal combustion engine, steam engines could still power war. But these engines are only efficient enough to move ships or locomotives. War tactics would be stuck in the late 1800s if we still relied on steam.

In fact, the ubiquitous internal combustion engine powers our next technology.