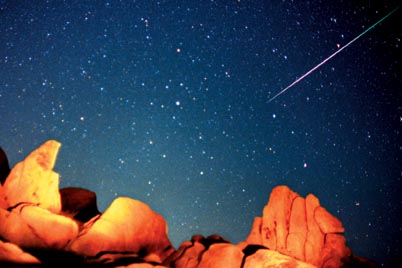 Keep your eyes to the skies in August, when you may get a chance to see the Perseid meteor showers. This happens when Earth passes through the tail of the Comet Swift-Tuttle. The small pieces of dust from the comet's tail enter Earth's atmosphere and make bright streaks of light. See more space exploration pictures.
Image courtesy of NASA

Some of the most interesting objects in our solar system are also the smallest or largest. In addition to the sun, planets, and moons, our solar system has a variety of small objects such as asteroids, comets, stars, meteors, and moons. These have affected what has happened on Earth in many ways.

An asteroid, if you're lucky enough to see one, is an amazing sight. They are the most common small objects in our solar system. They have small, rocky bodies that often are unusual shapes. There are tens of thousands of asteroids in the solar system. Most of them are in what is called the asteroid belt, which is a band of asteroids that remain mostly in an area between the orbits of Mars and Jupiter. This band of asteroids may have begun as a planet that was broken apart in a collision with another planet early in our solar system's history, or it could be material left over from when the solar system formed. Wherever it came from, this collection of small objects can't form into a planet because of gas-giant Jupiter's gravity. (There are other asteroid groups in the inner solar system.)

Even though asteroids are usually very small, some of them have their own tiny moons. As the Galileo spacecraft was on its way to Jupiter, it sent back pictures of the asteroid Ida with its own tiny moon, Dactyl. Galileo took pictures of Ida as it flew by, but no one knew it had its own moon until scientists started studying the images.

Asteroids have also affected life here on Earth in unpleasant ways. Earth has been hit by asteroids many times in its past. Asteroid impacts have left their marks behind in craters that we can still see today.

One of the most awe-inspiring sights in the night sky is a comet. Seeing a comet with its small, glowing head followed by a long, graceful tail moving across the sky is something you will remember for a very long time. For thousands of years, people thought comets were signs that something very bad was about to happen. When a comet flashed across the sky, it wasn't unusual for civil and religious leaders and the public to go into a panic trying to figure what bad thing was going to happen next.

In the 1700s, British astronomer Edmund Halley proved comets were objects that moved in a predictable way and had orbits just like the rest of the objects in the solar system. The most famous comet, Halley's Comet, is named in his honor. He correctly predicted that it would return to our solar system every 76 years.

You don't have to be a professional astronomer to discover a comet. Comet Hale-Bopp, which put on a spectacular sky show in 1997, was discovered by American amateur astronomers Alan Hale and Thomas Bopp.
Image courtesy of NASA

We now know that comets begin in the Oort Cloud, which is a vast cloud of ice and dust objects at the outer edge of our solar system. Every once in a while, for reasons that we still don't quite understand, one of these objects gets bumped out of its orbit and drops into the inner solar system. It is then a comet, and it gives us a great sky show.

Stars are glowing spheres of hot gases. Many have been around since early in the history of the universe. Other stars, like our sun, came from material produced by the first stars. Astronomers believe that stars have a specific life cycle in which they are born, grow, and die.

Stars form within enormous clouds of gas drawn together by gravity. As the gas contracts near the center of the cloud, its temperature increases. When the temperature reaches about four million degrees Fahrenheit, nuclear fusion begins, tremendous amounts of energy are produced, and the star begins to shine. Over a star's life, many changes in appearance occur, mostly due to changes in the production of energy at its core.

All stars form in pretty much the same way, but they are very different at different points in their life cycle. Also, the later stages of a star's life can take any of several paths, depending on the mass of the star or on how much matter it is made of.

Shooting stars aren't really stars at all. They are just tiny bits of rock, usually smaller than a garden pea, burning up as they crash into Earth's atmosphere at speeds of thousands of miles per hour. Occasionally we are treated to a meteor shower and sometimes even a meteor storm. This happens when Earth plows through a large number of dust particles. These dust particles come from comets, which also put on a great show in the sky. When a comet passes through the inner solar system, it leaves behind a trail of dust millions of miles long. These trails remain long after the comet has disappeared. If the comet's path is just right, Earth passes through the dust trail and we get to view a meteor shower.

There isn't a difference between a meteor and a meteorite. A meteorite is a meteor that was large enough that it didn't burn up completely in the atmosphere before reaching Earth. We have found that meteorites can come from other planets and from our moon.

And speaking of our moon . . . the number of planets in our solar system is almost nothing compared to the number and variety of moons that revolve around every planet except Mercury and Venus. Scientists think our moon may have been ripped from Earth in a gigantic collision billions of years ago.

Titan, the mega-moon that orbits Saturn, has its own atmosphere of nitrogen. It may also have lakes and possibly even its own continents. One of Jupiter's moons is the volcanic Io, whose surface is constantly being flexed by Jupiter's gravity. Another of Jupiter's moons is Europa, a striped ice moon. But scientists think it may have vast oceans underneath its icy crust.

Neptune's moon, Triton, has geysers of nitrogen spewing through a layer of nitrogen ice. Triton's pockmarked surface looks like the skin of a cantaloupe. In addition, it orbits Neptune in a backward direction called "retrograde," and may eventually spiral close enough to Neptune to be torn apart by the planet's gravity. Phobos, one of Mars's moons, may, millions of years from now, crash into the surface of the Red Planet.

The moons that orbit the planets in our solar system fall into two categories: icy or rocky. Rocky moons, as the name suggests, are moons made mostly of rocky material like our own moon. Icy moons are made mostly of ice, which can be frozen water, or ice made of other materials.

There are only eight planets in our solar system, but there are more than a hundred moons. Scientists believe that our moon and possibly other moons in the solar system were created when a large object such as an asteroid collided with the parent planet. Some may have been asteroids that got caught up in a planet's gravitation pull. Still other moons were probably formed from material left over when the planets were formed in the early days of the solar system. Saturn has moons that are part of its magnificent ring system.

Most moons have craters, which show that our early solar system was a crowded place with objects crashing into one another. The smaller object in the crash is usually destroyed, but the larger object is often left with a crater.

What Did the Big Bang Sound Like?
Astronomers Determine When 'Cosmic Dawn' Happened
Milky Way, How Do You Zip Through the Universe Like That?