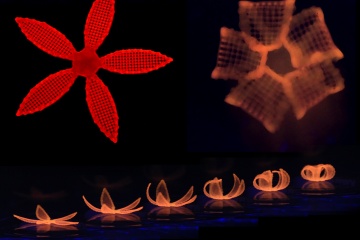 A team from Harvard created an orchid that took shape when placed in water.
Courtesy of Wyss Institute at Harvard University

When Tibbits mentioned his idea to the folks at Stratasys, a Minnesota-based 3-D printing company, they showed him a material that could grow 150 percent when submerged in water. Water offers a promising means by which to manipulate 4-D objects, since nature provides numerous working models of objects that change shape in response to moisture. We call them plants.

Plants exhibit tropisms, tendencies to grow in certain ways based on environmental factors, such as sunlight (phototropism), water (hydrotropism), gravity (gravitropism), chemicals (chemotropism) and even physical contact (thigmotropism). For example, plants tend to bend toward sunlight because sunlight kills hormones called auxins that encourage growth. Consequently, the side of a plant facing away from the sun grows faster than the side facing it, causing the plant to bend toward the light. With a little imagination, it's easy to see how we might similarly bend the physics that link materials, environments and energy to do our bidding.

Given the inspiration that plants have provided 4-D printing researchers, it's perhaps not surprising that a Harvard team made news in 2016 by creating a 4-D-printed "orchid" that assumed its namesake's shape when placed in water. The flower was printed using a hydrogel composite, which was piped, layer after layer, like icing from a pastry bag, onto the print bed [source: McAlpine].

Two aspects of the printing process explain the flower's behavior. First is the use of hydrogel, which can absorb large amounts of water. The second is the fact that the composite also contained cellulose fibrils — small, strong fibers essential to plant structure. Because the cellulose always flowed in a known direction, the team could carefully pattern it to control which parts of the flower could swell up and which parts would remain stiff once exposed to water [source: McAlpine].

No doubt, as time goes by we'll see many more experiments using a variety of other materials, such as conductors for flexible and dynamic electric circuits. But we'll also likely see the term 4-D printing, like most buzzwords, take on a life of its own, expanding to comprise a wider array of topics. For example, one company, Nervous System, describes its novel technique for 3-D printing clothing — which creates clothes from cleverly arranged nylon petals connected by joints— as "4-D printing" [source: Rosencranz].

Let's look at a few other potential 4-D futures.

Nervous System's dress was designed using kinematics, sometimes referred to as the geometry of motion. Through a lot of computation and some clever design, the company could build flexible garments out of tens of thousands of rigid, interlocking pieces. The Museum of Modern Art has since acquired the dress and the software used to create it for its permanent collection [source: Rosencranz].