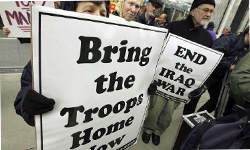 You're certainly not going to see this sign if you live in a country without a military. See more protesting pictures.
Justin Sullivan/Getty Images

After decades of witnessing the destruction and misery of combat firsthand, U.S. Civil War General William Tecumseh Sherman delivered the commencement address at the Michigan Military Academy in 1879. In his speech, he summed up his experience with three words: "War is hell."

Between 136.5 and 148.5 million people became casualties of war in the 20th century alone, according to Milton Leitenberg, a longtime scholar of arms control. The economics are equally staggering. For instance, U.S. spending on the wars in Iraq, Afghanistan and Pakistan could top $4 trillion [source: Watson Institute]. What's more, worldwide military expenditures for 2011 may reach nearly $2.2 trillion [source: GlobalSecurity.org].

Despite the exorbitant human and financial costs, the vast majority of governments consider defense spending to be a necessity. A few renegade countries have opted to shed their militaries, however. In this article, we'll explore both how and why they arrived at that decision and what defense (if any) they have in lieu of a full-fledged fighting force.

The first country is the most recent one on our list to get rid of its armed forces, but if the current president has his way, it might not be long for this article. Read on to see why.