by Jonathan Atteberry
Prev NEXT
5 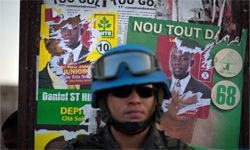 That's a Brazilian U.N. soldier, not a Haitian one, standing guarding in Port-au-Prince during the country's 2011 elections.
Allison Shelley/Getty Images

Haiti has the unfortunate distinction of being the poorest country in the Western hemisphere, a status it held well before a magnitude 7.0 earthquake devastated the nation in January 2010 [source: World Bank]. Although the reasons behind the country's poverty are complex and varied, Haiti's history of political turmoil certainly has played a part in its current hardships, and that turmoil often involved the military.

For instance, less than a year after Jean-Bertrand Aristide was elected president on Dec. 16, 1990, his government was overrun by a military coup. Haiti endured the makeshift military government until 1994, when the United Nations intervened and forcefully ousted Haiti's leadership. After Aristide was reinstated as president, he moved quickly to disband Haiti's armed forces before they could pose any further problems. Nowadays, Haiti relies heavily on U.N. forces for security, though in 2011, President Michel Martelly announced his intention to build up a new military to replace the U.N. troops.

Unlike Haiti, the next candidate on our list has no plans to bring its army back, and thanks to its police force, it probably won't have to.