Here's some food for thought. Since the dawn of mankind about 50,000 years ago, it's estimated that more than 108 billion humans have been born. But out of all those multitudes, only a dozen people have ever set foot on the moon. (So far, anyway.)

All 12 were highly trained astronauts in NASA's Apollo program. Everyone knows about Apollo 11, the 1969 mission that saw Neil Armstrong and Edwin "Buzz" Aldrin take humanity's first, tenuous steps onto another celestial body. But what about what happened next? After Armstrong's crew returned safely home, NASA flew six other Apollo missions. Each one brought new discoveries intertwined with fresh challenges.

An unforeseen technical issue forced Neil Armstrong to land the Eagle — Apollo 11's lunar module — 4 miles (6.4 kilometers) off-target. To geologists, that was worrisome. Future astronaut crews would need to land their modules with pinpoint accuracy, lest they overshoot regions of scientific interest.

Fortunately, Apollo 12 astronauts Pete Conrad and Alan Bean touched down right where they were supposed to. Aided by a sophisticated guidance system, the duo parked the lunar module Intrepid within 656 feet (200 meters) of Surveyor III — an unmanned spacecraft that had been sitting on the moon since 1967. It was exactly as NASA intended. Over the next 31 hours, Conrad and Bean set up scientific instruments and collected rock samples in a basaltic plain called the Ocean of Storms. They also fell victim to a good-natured Playboy centerfold prank.

Not everything on Apollo 12 went smoothly, though. During the crew's initial launch out of Cape Canaveral, Florida, their rocket was struck by lightning. Yet compared to what Apollo 13 went through, that was just a minor bump in the road.

Apollo 13 flight directors applaud the successful splashdown of the Command Module "Odyssey" after an onboard explosion nearly doomed the astronauts.
NASA

A veteran of the historic Apollo 8 mission, Jim Lovell found himself headed to the moon once again in 1970 — this time as the commander of Apollo 13. His new mission's core objective was to orchestrate a landing on the hilly Fra Mauro formation. Along with fellow astronauts Fred Haise and John Swigert Jr., Lovell was supposed to explore the area on foot and assess potential destinations for future crews.

That didn't happen. Some 55 hours, 53 minutes and 18 seconds into the flight, the flip of a switch unexpectedly caused an oxygen tank in the service module to explode. Shortly thereafter, the contraption lost water, electrical power, its propulsion system and its oxygen stores. All this happened while the crew was 200,000 miles (321,868 kilometers) from Earth.

Forced to scrap the moon landing, mission control worked like crazy to devise a way to bring Lovell and company home. Thanks to NASA's heroic efforts, the men came back safe and sound. They spent much of the return trip cramped inside the lunar module, which became a cosmic lifeboat. En route, the astronauts looped around the far side of the moon.

Apollo 14 astronaut Alan Shepard stands by the Modular Equipment Transporter (MET), which was a cart for carrying around tools, cameras and sample cases on the lunar surface.
NASA

Alan Shepard had his doubters. Ten years after he became the first American to visit space, Shepard got to command Apollo 14. But at age 47, some colleagues thought he was too old for the job.

During the lunar module descent, there was a last-minute computer gaffe that nearly forced Shepard's crew to abort their landing. Enter Don Eyles, an MIT programmer who saved the day by relaying an improvised command sequence to the crew.

Thanks to Eyles' quick thinking, Shepard and his compatriot Edgar Mitchell reached their destination: The still-unexplored Fra Mauro Formation. Together, the pair gathered nearly 93 pounds (46 kilograms) of rock and soil samples. But what most people remember about Apollo 14 is Shepard's golfing session. At one point, he broke out a modified six-iron and hit two golf balls on the moon.

Apollo 15 lunar module pilot Jim Irwin became one of the first men to drive on the moon. Here he loads the Lunar Roving Vehicle with tools and equipment.
NASA

With limited oxygen supplies, Neil Armstrong and the other Apollo-era moonwalkers couldn't venture too far away from their lunar modules. That's why NASA was excited to debut the Lunar Roving Vehicle (LRV), its four-wheeled electric rover during the Apollo 15 mission.

On July 30, 1971, David Scott and James Irwin entered the history books as the seventh and eighth men to walk on the moon, respectively. But they also became the first humans to drive on the moon. Driving around in the LRV, the duo covered a grand total of about 17.5 miles (28 kilometers) of the lunar surface, enabling them to gather a wide range of geologic samples.

Under NASA's direction, they also set a new extravehicular activity — or "EVA" — record. Basically, an EVA is any task that requires an astronaut to spend time outside of his or her spaceship after leaving Earth's atmosphere. Apollo 15 became the first mission that involved more than two of these excursions on the moon's face. During their three scheduled EVAs, Scott and Irwin spent a grand total of more than 18 hours traversing the lunar surface.

The Lunar Roving Vehicle (LRV) gets a speed workout by astronaut John W. Young in the "Grand Prix" run during the first Apollo 16 spacewalk. This is actually a frame from motion picture film shot by astronaut Charles M. Duke Jr.
NASA

Apollo 16 had a few hiccups. Among these were a set of helium leaks in low-Earth orbit and a malfunction that impacted the lunar module's propulsion system. Oh, and did we mention that commander John Young unwittingly cursed into a "hot" microphone when he experienced a bout of flatulence on the moon?

But let's not overlook the expedition's triumphs. Indeed, Young and lunar module pilot Charles M. Duke did the scientific community a great service. The breccia samples (breccias are rocks composed of older rocks fragments) they gathered demonstrated that, contrary to the prevailing wisdom of the time, the moon's Cayley Plains highlands were not produced by volcanoes. Like their predecessors, Young and Duke made ample use of the LRV, driving it for 16.6 miles (26.7 kilometers).

On Dec. 13, 1972, scientist-astronaut Harrison H. Schmitt is photographed standing next to a huge, split lunar boulder during the third Apollo 17 extravehicular activity (EVA) at the Taurus-Littrow landing site.
NASA

Before geologist and future U.S. Sen. Harrison "Jack" Schmidt came along, NASA had never put a professional scientist on the moon. To prepare himself for lunar travel, Schmidt spent 53 weeks in flight training at the Williams Air Force Base.

Schmidt's field experience came in handy on Apollo 17. He and mission commander Gene Cernan collected a whopping 249 pounds (113 kilograms) of rock samples in the Valley of Taurus-Littrow. Altogether, they spent an unprecedented 22 hours, three minutes, and 57 seconds on EVAs.

As fate would have it, this was the last of NASA's Apollo missions. Cernan, who passed away in 2017, had the distinction of being the last man to walk on the moon — although NASA hopes to send a new set of astronauts up there in 2024. Recognizing the historical weight of their departure, the Apollo 17 crew left a commemorative plaque behind. Near the end of their stay on the moon, Cernan said "we leave as we came and, God willing, as we shall return: with peace and hope for all mankind. Godspeed the crew of Apollo 17."

NOW THAT'S INTERESTING
Alan Shepard was good friends with comedian and celebrity golfer Bob Hope, who reportedly inspired the astronaut to hit those balls on the moon.

Great British Baking Terms: Know Your Scones From Your Biscuits 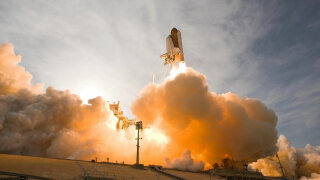 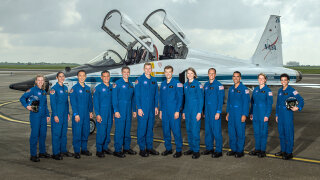 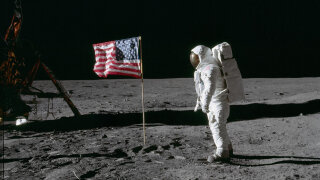