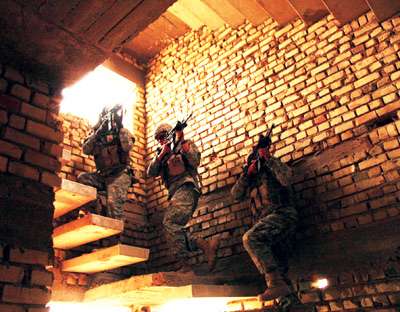 The foundation of Ranger operation is performing as a quick "shock troop" -- one capable of carrying out surprise strikes . But how they get to their strike zone, what they do there and what command is calling the shots varies widely by operation.

Since they're Airborne graduates, Rangers often parachute to the designated insertion area. But they're also trained for other types of insertions -- or means of getting soldiers quickly and quietly behind enemy lines -- like a small boat in a swamp or down fast lines (ropes lines that allow a quick descent) from the sides of a helicopter. Once on the ground, their operations take many forms. In a strike situation, the Rangers' archetypal operation is the seizing of an airfield.

They're also extremely versatile and can easily move from a special operation into a conventional one, once the initial mission is fulfilled. For example, if the Rangers' mission is to take an airfield, they may parachute in, eliminate any threats, take control of the airfield and signal that the mission is accomplished. When conventional forces move into the secured airfield, Rangers can link up with them, moving onward as part of the larger conventional-fighting force.

These kinds of strikes and raids are called direct-action operations, and they can eventually get pretty loud due to the gunfire that erupts. There's another type of operation for which Rangers are suited -- reconnaissance, or recon. Recon is Ranger tradition, born from the Colonial scouts and honed by the long-range patrols in Vietnam. All Rangers are taught recon, but there's also a small specialized group of Rangers extensively trained for scouting and recon -- the Regimental Reconnaissance Detachment (RRD).

Created in 1984 as part of the Ranger expansion, the RRD consists of three, four-man teams of seasoned scouts who can survive for up to five days behind enemy lines in a silent state with minimal movements [source: SpecWarNet]. There are only 12 of these soldiers for the entire 75th Regiment, and each team is attached to one of the three battalions. RRD Rangers are asked to confirm or deny existing intelligence, place surveillance equipment in enemy territory, report on troop movement and call in strikes or acquire targets. In some very uncommon circumstances, these teams may be called upon to carry out specific direct-action strikes, but for the most part, their main objective is to come and go undetected.

Rescue missions are also tailor-made for Rangers. These missions are often a combination of direct action and reconnaissance. Rangers must first confirm intelligence concerning the whereabouts of a lost troop or prisoner of war (POW), and in many cases must engage the enemy with fire to gain control of their objective. Rangers are suited for rescue missions because of their ability to get in and get out, their endurance for long-distance movement, their ability to remain undetected and their light-infantry capabilities. All this means that Rangers can get to places that most others can't.

Perhaps the most notable Ranger-rescue mission was carried out by troops led by Colonel Henry Mucci. In the next section, we'll learn about Mucci's Rangers and some other notable Ranger operations.