What's the difference between backscatter machines and millimeter wave scanners? 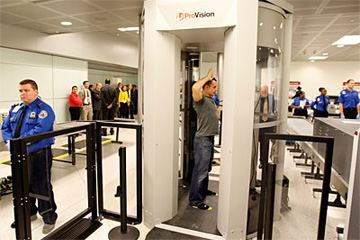 Like backscatter X-ray machines, millimeter wave scanners produce detailed full-body images of passengers, but they do it with ultrahigh-frequency millimeter wave radiation rather than X-rays.
Ed Murray/Star Ledger/Corbis

If you went on name alone, you might think "advanced imaging technology machines" could help doctors hunt for tumors or other medical conditions. In reality, the label -- euphemism, if you're cynical -- adopted by the U.S. Transportation Security Administration (TSA) describes the whole-body scanners found at airports that detect weapons, explosives or other threats being carried on passengers.

According to the TSA's Web site, the agency had installed 800 advanced imaging technology machines at 200 U.S. airports as of November 2012. The machines come in two flavors, based on the type of electromagnetic radiation they use to make a scan. Backscatter machines -- about 30 percent of the installations -- send low-energy X-rays to bounce off a passenger's body. Millimeter wave (mmw) scanners emit energy more akin to microwaves. Both see through clothing to produce a 3-D image of the person standing in the machine.

As soon as the TSA began installing the scanners in 2010, passengers, pilots and public health officials began firing off questions. How much radiation do these machines produce? Is it enough to increase cancer rates in the general population? And can TSA agents see intimate details we'd rather they didn't?

The European Union has addressed these questions decisively: It bans any body scanners that use X-ray technology. That ban complies with a law in several European countries that says people shouldn't be exposed to X-rays except for medical reasons. In the U.S., the TSA and the vendors that manufacture the scanners – such as Rapiscan for backscatter and L-3 Communications for millimeter wave -- continue to assure the public about the safety of the devices. And they've taken steps to protect passenger privacy by installing software that either creates generic outlines of people or blurs certain regions of the image.

Still, many people remain skeptical that airport scanners, in any shape or form, are completely safe. And many more feel a bit lost trying to understand how the machines work and how they're different. With that in mind, we're going to compare and contrast the two technologies across a variety of parameters, starting with the kind of energy they emit. 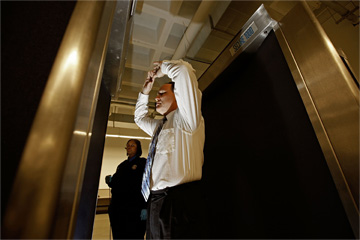 A volunteer stands inside a backscatter scanner during a demo at the Transportation Security Administration's Systems Integration Facility at Ronald Reagan National Airport on Dec. 30, 2009. Backscatter technology is one of two types of imaging technology that the U.S. government agency uses.
Chip Somodevilla/Getty Images

Both types of scanners give off energy in the form of electromagnetic radiation, which exists in nature as waves of energy made from both electric and magnetic fields. These waves travel through space and come in various sizes, or wavelengths. Backscatter machines produce low-energy X-rays, which have a wavelength on the order of 0.0000000001 meters, or 0.0000001 millimeters. Millimeter wave scanners produce a special type of microwaves with wavelengths that fall in a range exactly between 0.001 meters (1 millimeter) and 0.01 meters (10 millimeters). In other words, the waves emitted by mmw scanners are much larger and therefore have less impact on small structures, such as human proteins and nucleic acids.

In terms of construction, a single backscatter machine includes two radiation sources so that both the front and the back of the person can be imaged without producing any blind spots. Each radiation source is housed in a rectangular structure resembling a large industrial freezer. The two units face each other with a gap between them big enough to accommodate a person.

A millimeter wave scanner, however, looks a lot like an oversized, hexagonal telephone booth. Two of its six panels are open to serve as an entrance and an exit, while four of the panels sport transparent glass or plastic. Two stacks of disc-shaped transmitters, each surrounded by a curved protective shell known as a radome, sit inside the wall of the structure and pivot 180 degrees around a central point.

Now that we've gotten the gist of the structures, let's see how they produce images of you.

Backscatter machines use rotating collimators to generate X-rays, which pass through a slit and strike a passenger standing inside. The X-rays penetrate clothing, bounce off the person's skin and return to detectors mounted on the machine's surface. The radiation also bounces off weapons, explosives or other threats concealed in clothing or lying against the skin. By sensing and analyzing this so-called backscatter, the machine is able to create an image of a person, as well as any organic or inorganic items carried on that person.

Millimeter wave scanners use small, disc-like transmitters to make an image. Each transmitter emits a pulse of energy, which travels as a wave to a person standing in the machine, passes through the person's clothes, reflects off the person's skin or concealed solid and liquid objects and then travels back, where the transmitter, now acting like a receiver, detects the signal. One disc would only scan a small portion of the test subject, so a single machine contains two stacks of discs connected by a bar that pivots around a central point. Because there are several transmitter/receiver discs stacked vertically and because these stacks rotate around the person, the device can form a complete picture, from head to toe and front to back.

Peering Beneath Your Clothing: Backscatter and Millimeter Wave Images

Peering Beneath Your Clothing: Backscatter and Millimeter Wave Images 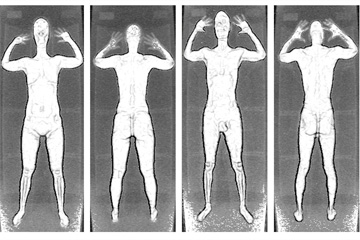 Backscatter technology creates an image that looks like a chalk etching. According the TSA Web site, the agency has tested new software for backscatter units that produces a generic outline similar to the one that mmw scanners equipped with ATR software generate.
Image courtesy of TSA

Both types of scanners rely on software to convert reflected electromagnetic energy into images. The exact configuration of the software determines the level of detail seen in the final example. For example, a backscatter machine with the most basic version of the software produces a whole-body silhouette of the subject that resembles a chalky sketch. Some details about a person's build and shape are visible in this image. With a privacy algorithm applied, however, the software blurs these details and only highlights potential threats.

Millimeter wave scanners also can produce images that reveal a person's unique topography, but in a way that looks like a crudely formed graphite prototype. Since their introduction, the TSA has armed these machines with automated target recognition, or ATR, software, which produces a generic outline of a person -- exactly the same for everyone -- highlighting any areas that may require additional screening. And that occurs only if the scanner detects something it perceives as suspicious. If it doesn't, it will display the word "OK" with no image.

For passengers, the process of being scanned is essentially the same in either machine. They must remove everything from their pockets, as well as belts, jewelry, lanyards and cell phones. Then they step up a small ramp, stand in the center of the machine, raise their arms, bent at the elbows, and remain motionless as the device does its thing. The only difference is the time required to complete a scan. For backscatter machines, the process takes about 30 seconds. For mmw scanners, it takes about 10 seconds.

Here's another difference, perhaps more significant than those 20 seconds. Backscatter machines rarely produce false alarms. According to one British study, their false alarm rate was about 5 percent [source: Grabell and Salewski]. Millimeter wave scanners don't perform as well. They can get fooled by folds in clothing, buttons and even beads of sweat. When Germany tested mmw scanners, security officials there reported a false positive rate of 54 percent, meaning that every other person passing through the machine required a pat-down that found no weapon or concealed object [source: Grabell and Salewski].

And now we come to the most controversial and hotly debated topic regarding whole-body scanners: their safety. The question about safety comes down to whether a scanner uses ionizing radiation or not. Ionizing radiation has enough energy to remove electrons from atoms and therefore alter the structure of biological molecules, such as proteins and nucleic acids. X-rays are a form of ionizing radiation; radio waves, visible light and microwaves aren't.

Backscatter machines use X-rays, so the question then becomes one of intensity and duration. The manufacturers of the scanners insist that a single scan exposes a person to minuscule levels of radiation. In fact, a Rapiscan executive has said, "You would have to go through [a backscatter] scanner 1,000 times to equate to one medical X-ray. You get twice as much radiation when eating a banana than when going through the scanner" [source: Paur].

But other studies have come to more troubling conclusions. One, from the Marquette University College of Engineering, found that backscatter X-rays do penetrate the skin and strike deeper tissues. In a second study, researchers from the Columbia University Medical Center estimated that 1 billion backscatter scans per year would lead to 100 radiation-induced cancers in the future.

Millimeter wave scanners don't carry these risks because they use non-ionizing radiation. To date, no known safety issues have been found with this type of scanner.

Here's another biggie: privacy. Both types of scanners are capable of producing images that reveal intimate details about travelers. With that said, the TSA has gone to great lengths to protect the privacy of those being scanned. The software of backscatter machines, for example, includes a privacy algorithm to blur genitalia and faces while highlighting potential threats.

Most (but not all) millimeter wave machines use automated target recognition (ATR) software that renders every subject as a generic outline, with suspicious areas highlighted. And if it doesn't detect anything suspicious in a scan, it displays the word "OK" with no image at all. For scanners without ATR software, the security operator viewing the resulting image sits at a remote location and communicates wirelessly with the agent operating the machine.

Supposedly, neither type of machine is capable of storing images -- each image is deleted automatically as soon as the security team completes its inspection -- but there have been reports of U.S. marshals in Florida downloading and storing thousands of images [source: McCullagh].

That's it. That's all we have. You may now consider yourself an expert on advanced imaging technology machines.

Worldwide Use of Scanners

The European Union has banned the use of backscatter machines because it believes X-rays should be reserved for medical use only. The U.S., Nigeria and the United Kingdom have widely adopted backscatter technology, although the latter operates it as a secondary screening option.

Millimeter wave scanners enjoy more widespread use. In the U.S., the TSA has installed hundreds of the devices at most major airports. And internationally, they are being used in airports and mass transit systems in several countries, including Canada, the Netherlands, Italy, Australia and the United Kingdom. Some countries, like France and Germany, have stopped using mmw scanners because of their high false alarm rate.

I'm not against absorbing a few X-rays in the interest of staying safe at 30,000 feet, but I can't help but wonder why the TSA insists on using backscatter machines when millimeter wave scanners deliver the same intelligence without potentially harmful ionizing rays. Didn't the government learn anything from the Beta/VHS wars?