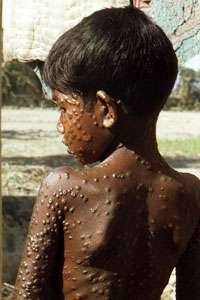 As indicated by the maculopapular rash covering his entire body, this young boy contracted smallpox. The photo was taken in Bangladesh in 1974.
Jean Roy/CDC

There are many ways to implement a biological attack, but these are some of the most feared agents, from least to most threatening:

It would also be possible to cause significant problems by targeting the food supply. For example, foot-and-mouth disease has been a huge problem in Europe. Spreading the disease to the United States would be relatively easy and very disruptive.