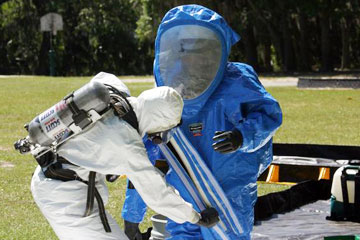 An effective chemical attack would use chemicals that are extremely toxic to people in small quantities. From least to most threatening, the most commonly feared agents are:

Not all feared chemical weapons attack the nerves. Blistering agents, like mustard gas, blister the skin, destroy lung tissue and can kill people. But they are less deadly than nerve agents.

One of the problems with these chemical agents is that there is no easy way to protect yourself. On the battlefield, soldiers wear gas masks and complete skin coverings when chemical or biological attack is deemed possible. If a city were to experience a large-scale VX attack, people would have to be wearing a waterproof and airtight suit and a gas mask at the time of the attack in order to be protected.