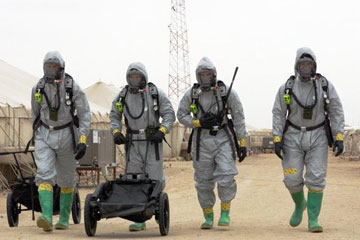 There is an interesting paradox when it comes to war in the modern world. Anyone who has experienced war knows that it is about death and destruction on a massive scale. People die one at a time because of bullets, bayonets, hand grenades and landmines, and they die in large groups because of cannons, bombs and missiles. Buildings, factories or entire cities get destroyed.

Despite the appearance of anarchy, warfare between modern nations does have rules. These rules, like the Geneva Conventions, for example, tend to discourage the wholesale destruction of civilians, and they govern the treatment of prisoners of war. The rules are not always followed to the letter, and many times are broken completely, but they do exist.

Chemical weapons were first used in World War I, and the nations of the world quickly and uniformly decided that these weapons went too far. Apparently, killing people with flying metal and explosives was one thing, but launching a cloud of deadly chemicals or bacteria -- the effects of which could neither be predicted nor controlled -- was another. Significant treaties prohibiting biological and chemical weapons, starting as early as the 1925 Protocol for the Prohibition of the Use in War of Asphyxiating, Poisonous or Other Gases, and of Bacteriological Methods of Warfare, have been signed by most nations of the world.

The unfortunate problem is that terrorists and rogue leaders don't pay attention to significant international treaties.

Charles Taylor, the former president of Liberia, is one such rogue leader. Among many crimes, he is on trial for violating the Geneva Conventions during the Liberian civil war. The charges include having soldiers kill peacekeepers and rape and murder civilians [source: Crane].

The Chemical Weapons Conventions have been disregarded as well. Although Iraq was a signatory, Saddam Hussein rained mustard gas and sarin on Kurdish civilians in Iraq, killing thousands, during the Iran-Iraq war [sources: Burns, Chivers].

And states that don't sign the treaties, like North Korea, posses whatever they like. North Korea has sarin and anthrax weapons and is suspected of being armed with smallpox [source: Kristof].

That is where the threat of chemical and biological weapons used in random attacks on innocent civilian populations comes from.