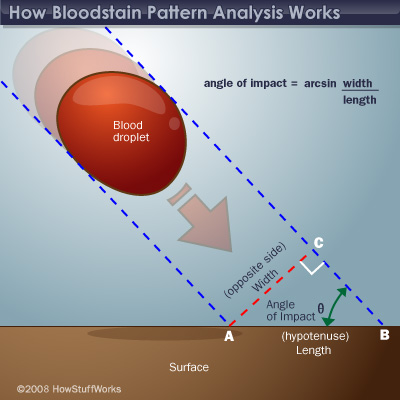 Angle of impact of a blood droplet
2008 HowStuffWorks

To analyze a bloodstain pattern, an expert relies on three main interrelated elements: the size, shape and distribution of bloodstains. The most visually striking part of the process, and therefore the one most featured in shows like "Dexter," is the technique of stringing. However, this technique can take place only once analysts grasp certain other aspects of the bloodstains. Since we've already discussed stain size, let's dive right into shape.

Blood drops that fall straight down with little but gravity and air resistance affecting them make round stains. Blood moving at an angle and sped along by some force, however, tends to make elongated marks, especially when it strikes a nonporous surface. As a rule, following the long axis of the stain from the blunter end to the sharper, more disturbed edge reveals the direction the blood traveled. If a number of stains radiate outward, analysts can draw lines backward along these axes to an area of convergence. But this gives them an area in only two dimensions; investigators must also determine how far above the floor, or away from a vertical surface, the area of origin lies [source: Dutelle].

The time has almost come to break out the string. First, however, investigators must determine the angles at which the various bloodstains struck their respective surfaces. The lower the angle at which blood strikes a surface, the thinner and more elongated the stain. The converse holds true as well [source: Dutelle].

For example, a 10-degree drop creates a highly elongated stain, whereas a 90-degree (vertical) blood drop leaves a round stain [source: Dutelle]. Thanks to a handy mathematical formula, analysts can use these measurements to calculate the impact angle:

The greater the difference between the width and length, the sharper the angle of impact [source: Dutelle]. For example, imagine a bloodstain 0.08 inches wide by 0.16 inches long (2 by 4 millimeters). The width divided by the length equals 0.5. The ArcSin of 0.5 is 30, meaning the blood hit the surface at a 30-degree angle. In a bloodstain measuring 0.04 by 0.16 inches (1 by 4 millimeters), the impact angle comes out to about 14.5 degrees.

If the bloodstain has a tail, as can occur in droplets striking a surface at certain angles and speeds, it should be left out of this calculation [sources: Dutelle, Eckert and James].

Once analysts know these angles, they can begin to run strings from the rear edges of the bloodstains upward at the appropriate angles to find where they roughly meet — the area of origin. This only provides an approximation, however, and is mainly used to establish whether a victim was seated, standing or lying down when the event occurred. The presence or absence of blood on other surfaces, combined with common sense, also aids in this analysis [source: Dutelle].

Increasingly, analysts are taking advantage of computer programs that allow them to store spatter data, calculate values such as impact angle, and display information in helpful 3-D renderings. Initially, this software required manual data entry, which was tedious but perhaps not as tedious as stringing. Software manufacturers hope to eventually be able to scan crime scenes with lasers or to automate the analysis of digital images, but many hurdles remain. For example, computers will need some way to register all crime scene photos to the same coordinate plane and angle and must acquire an expert's ability to distinguish secondary spatter from primary, among other judgment calls [sources: James et al., Shen et al.].

The field of bloodstain pattern analysis requires knowledge of math, physics, biology and chemistry. Students in criminology and criminal justice learn about bloodstain pattern analysis in forensic science classes or classes specifically on blood spatter. A common path for professionals involves earning a degree or certificate in criminal justice or forensic science, augmented by courses, workshops and seminars taken periodically throughout their careers [source: RRCC]. Many law enforcement officers train in bloodstain pattern (or blood spatter) analysis through the International Association of Bloodstain Pattern Analysts (IABPA). The IABPA developed criteria for basic and advanced courses on the subject [source: IABPA]. Other organizations, such as the International Association for Identification (IAI), offer workshops and seminars, in addition to advanced courses that lead to certification in blood spatter analysis.