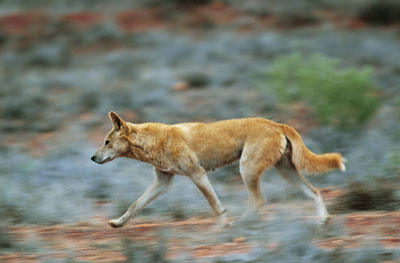 Did a dingo take the baby? The most recent ruling says yes.
Theo Allofs/Photonica/Getty Images

One infamous case that comes to the minds of many people when thinking about blood spatter analysis involves a line that has since become a pop-culture catchphrase (thanks to Meryl Streep in "A Cry in the Dark" and Julia Louis-Dreyfus on "Seinfeld"): "The dingo ate my baby."

In August 1980, the Chamberlain family camped near Uluru (formerly known as Ayers Rock) in the Red Centre desert of Australia's Northern Territory. One night, Lindy Chamberlain put two of her children, 4-year-old Reagan and 9-week-old Azaria, to bed in their tent. When she returned, the story goes, she cried, "The dingo's got my baby!" [source: Latson]

According to Lindy, when she got to the tent she saw a dingo with a bundle in its mouth. She wasn't close enough to see what it was, but when she checked on the children she saw that her daughter Azaria was missing [source: Haberman]. As the cry went out, she and her husband, Michael, along with other campers, began searching for the child. A nearby camper, Sally Lowe, went into the tent to check on the still-sleeping Reagan. Seeing a pool of wet blood on the floor of the tent, she thought that Azaria was probably already dead [source: Linder].

When a tourist found the baby's jumpsuit, it was only slightly torn and bloody, but mostly intact. Though an initial investigation backed up Lindy Chamberlain's claim of a wild dog attacking her daughter, it was not long before the parents themselves stood accused [source: Haberman].

The baby had been wearing other clothes that weren't found at the time [source: Latson].

Throughout the case, the local police improperly handled blood spatter and other evidence. Forensics investigators found "blood stains" in the family car and concluded that Lindy had taken Azaria there to cut her throat. Later analysis revealed that the stains came from a spilled drink and a sound-deadening compound that came with the car. One expert identified a "bloody hand print" on Azaria's jumpsuit that later analysis revealed to be red desert sand. However, in 1982, expert testimony — and public opinion — proved enough to convict Lindy Chamberlain of murder and her husband of being an accessory to murder. The baby's knit jacket, found in 1986 near a dingo lair, helped exonerate the Chamberlains after Lindy had served three years of a life sentence, but several years of trials and hearing were yet to come [source: Latson]. In 2012, 32 years after the event, a coroner finally pronounced that a dingo was responsible for the death [sources: Haberman, Latson].

The Chamberlain case shows what can happen when people involved in handling and analyzing blood evidence lack proper training, or when investigators allow public opinion or preconceived notions to influence their analysis.