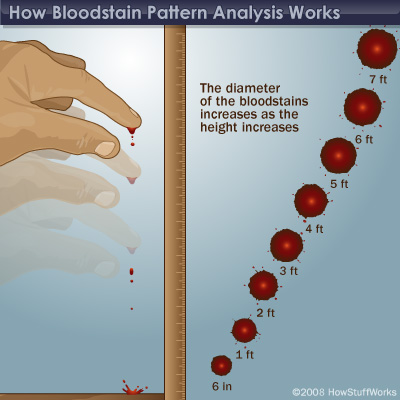 As height increases, so does the diameter of the blood drop
2008 HowStuffWorks

When a crime results in bloodshed, the blood left behind functions as evidence for investigators. However, a bloodstain pattern analyst can't simply glance at drips and smears of blood and immediately tell you the who, what and when of a crime scene. Blood spatter analysis takes time and provides only a few pieces of the total crime puzzle. Yet such analysis can corroborate other evidence and lead investigators to seek additional clues. After close analysis, blood spatters can provide important clues to aspects of the violent act such as [sources: Dutelle, James et al., Murray]:

Blood spatters can guide the recreation of a crime thanks to the same laws of motion and gravity, physics and chemistry that govern all liquids. Blood travels in spherical drops because of surface tension, the tendency of liquids to minimize surface area because their molecules are attracted to one another — it's cohesive [sources: DLS, Rosina et al.]. Also, its drops behave in predictable ways when they strike a surface or when a force acts on them.

Consider what happens when you spill water: The liquid falls to the ground and makes a puddle. The shape and size of the puddle depends on the amount of liquid, the height of the container, and whether you spill on carpet, wood, linoleum or some other surface. In general, more liquid, or a fall from a greater height, will make a larger puddle. Moreover, droplets striking a hard surface will retain a more circular shape than those landing on carpet, which partially absorbs the liquid and causes the edges to spread [sources: Dutelle, Murray, Wonder]. These are but some of the many factors a blood spatter analyst must consider.

Blood dries over time. How quickly this happens depends on the surface on which the blood landed, how much blood the spatter contains, and the heat and humidity at the crime scene, but as a rule the outer edges of the stain dry first. Consequently, after the interior portion flakes off or is smeared by an object, a dry blood spatter can skeletonize, that is, leave behind a ring similar in appearance (if not color) to a water ring on a coffee table [source: James et al.]. Patterns of drying help analysts determine how long an assault went on, detect whether it took place all at once or in stages, and nail down possible crime scene contamination [source: Wonder]. Clotting patterns in blood provide similar information and can help nail down the time factor if analysts arrive at the scene before blood can dry. Clotting begins within 3 to 15 minutes, but actual times vary by amount, surface type and environment. Mixed levels of clotting can indicate that multiple blows or gunshots occurred over time [sources: Dutelle, Wonder].