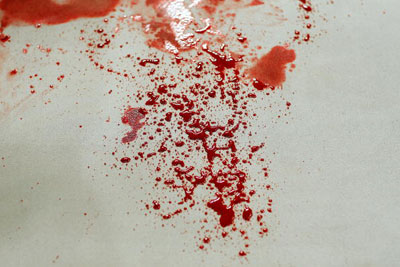 Blood behaves not unlike those spilled water droplets, and the speed at which the droplets travel when they strike a surface, known to analysts as a target, affects their shape. This speed, combined with angle and surface characteristics, also determines how far blood droplets skip or bounce after meeting a barrier.

One category of slow-moving blood, called "drips," occurs after, not during, an injury, and has a relatively large footprint of 0.16 inches (4 millimeters) or more. Drips can fall from a bleeding nose or wound, or a motionless, bloodied weapon or object. A moving object produces what's known as a cast-off pattern. Other low-velocity patterns include blood pooling around a victim's body and impressions left by bloody objects. This latter phenomenon, called a transfer, sometimesretains the shape of the object that made it [source: Wonder].

At the other end of the scale are the tiny droplets caused by blood travelling at high speeds. These are usually caused by gunshot wounds, but they can also result from explosions, power tools or high-speed machinery. These fast-moving drops leave stains measuring less than 0.04 inches (1 millimeter) across.

Bullet wounds can produce both back and front spatters. Backspatter, or blowback, refers to blood exiting the entrance wound in the direction opposite the impact [source: Dutelle]. (Actually, thanks to Newton's Third Law of Motion, backspatter can result from other impacts and traumas as well.) Investigators dealing with such small drops must rule out other sources of blood spray, such as respiration or pinhole arterial pressure [source: Wonder]. Forward spatter, in the direction of the impact, occurs only in the case of an exit wound [source: Dutelle].

Between these extremes lies a range of medium-sized droplets. Typically measuring 0.04 to 0.16 inches (1 to 4 millimeters), they can be caused by a blunt object, such as a bat or a fist, or can result from stabbing, cast-offs or even bloody coughs [sources: Dutelle, Wonder]. A number of factors complicate their analysis. For example, during a beating or stabbing, arterial damage can cause the subject to bleed faster or to spurt blood, the latter creating what's known as a projected pattern [source: Dutelle].

In addition to spatters, analysts look for voids, aka blockages. In the case of a high-density spatter, these gaps in the pattern indicate that something in the way, potentially the shooter, caught some of the victim's blowback.

Drop size is only one aspect used in analyzing blood spatters. Next, we'll look at the shapes of spatters and how analysts use strings, trigonometric functions and computer programs to map out a blood-spattered crime scene.

The Way of the Gun

In close-range gunshot, hot gunpowder exiting the gun barrel can bruise, burn or penetrate the skin in a powderstippling pattern, which analysts can use to estimate distance [source: Hueske]. Backspatter can cause external and internal muzzle staining, but in unusual cases the internal stain can also result from the cooling of explosive gases released by the gunshot, which suck the victim's blood into the gun's muzzle [source: Evans].