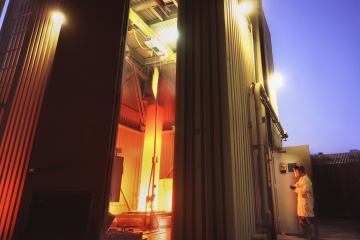 When you think of industrial metalwork, you probably picture torches, full-face visors and sparks showering to the ground. This is a fairly accurate image of gas welding, which uses an acetylene torch to produce the heat necessary to fuse two pieces of metal. In many cases, pure oxygen is mixed with the gas to make the flame more intense. These oxyacetylene torches can produce a flame that's almost twice as hot as a flame resulting from an air-gas mixture.

Brazing can occur at lower temperatures than welding, though that doesn't eliminate the gas torch as an option. In fact, torch brazing is still common in certain applications, such as joining a tube into a fitting using copper or silver brazing filler metals. Gases include acetylene, hydrogen or propane, and metalworkers must exercise some care in choosing a heat source appropriate for their project.

Luckily, torch brazing isn't the only option. Induction brazing, which generates heat by passing electricity through a coil, is another way to join metal reliably. Using this technique, a metalworker holds the assembly between a set of induction coils and then initiates flow of a high-frequency current. As the current flows through the coil, electrical resistance generates heat, which rapidly raises the temperature of the metal part and the brazing filler. When the filler melts, he can turn off the current and allow the whole assembly to cool. A high-quality induction system can heat very small areas within narrow production tolerances. And because the heat can be precisely controlled, the process doesn't change the characteristics of the base metals being brazed.

Furnaces offer a final option as long as it's acceptable to heat the entire assembly. In this case, filler metal must be applied before the heating process. Then, a conveyor belt transports the piece into the furnace, where brazing occurs, and out the other side for cooling. Silver- and copper-based fillers are most commonly used in standard furnaces, although vacuum furnaces, which can pump oxygen out of the heating environment, extend the flexibility of the process, making it possible to braze with alloys that are sensitive to oxidation at high temperatures. Furnaces are also well-suited to automation as multiple pieces can pass through the preheating, heating and cooling phases in a continuous operation.