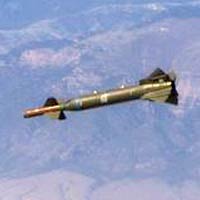 There are thousands of military facilities around the world that defy conventional attack. Caves in Afghanistan burrow into mountainsides, and immense concrete bunkers lie buried deep in the sand in Iraq. These hardened facilities house command centers, ammunition depots and research labs that are either of strategic importance or vital to waging war. Because they are underground, they are hard to find and extremely difficult to strike.

The U.S. military has developed several different weapons to attack these underground fortresses. Known as bunker busters, these bombs penetrate deep into the earth or right through a dozen feet of reinforced concrete before exploding. These bombs have made it possible to reach and destroy facilities that would have been impossible to attack otherwise.

In this article, you'll learn about several different types of bunker buster so you will understand how they work and where the technology is heading.

During the 1991 Gulf war, allied forces knew of several underground military bunkers in Iraq that were so well reinforced and so deeply buried that they were out of reach of existing munitions. The U.S. Air Force started an intense research and development process to create a new bunker-busting bomb to reach and destroy these bunkers. In just a few weeks, a prototype was created. This new bomb had the following features: 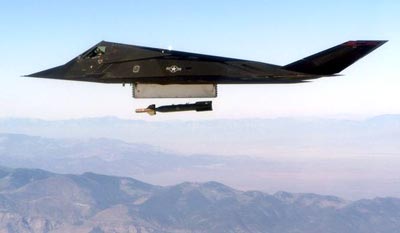 To make bunker busters that can go even deeper, designers have three choices:

One way to make a bunker buster heavier while maintaining a narrow cross-sectional area is to use a metal that is heavier than steel. Lead is heavier, but it is so soft that it is useless in a penetrator -- lead would deform or disintegrate when the bomb hits the target.

One material that is both extremely strong and extremely dense is depleted uranium. DU is the material of choice for penetrating weapons because of these properties. For example, the M829 is an armor-piercing "dart" fired from the cannon of an M1 tank. These 10-pound (4.5-kg) darts are 2 feet (61 cm) long, approximately 1 inch (2.5 cm) in diameter and leave the barrel of the tank's cannon traveling at over 1 mile (1.6 km) per second. The dart has so much kinetic energy and is so strong that it is able to pierce the strongest armor plating.

U-238 is a radioactive metal that produces alpha and beta particles. In its solid form, it is not particularly dangerous because its half-life is 4.5 billion years, meaning that the atomic decay is very slow. Depleted uranium is used, for example, in boats and airplanes as ballast. The three properties that make depleted uranium useful in penetrating weapons are its:

These three properties make depleted uranium an obvious choice when creating advanced bunker-busting bombs. With depleted uranium, it is possible to create extremely heavy, strong and narrow bombs that have tremendous penetrating force.

But there are problems with using depleted uranium.

The problem with depleted uranium is the fact that it is radioactive. The United States uses tons on depleted uranium on the battlefield. At the end of the conflict, this leaves tons of radioactive material in the environment. For example, Time magazine: Balkan Dust Storm reports:

NATO aircraft rained more than 30,000 DU shells on Kosovo during the 11-week air campaign… About 10 tons of the debris were scattered across Kosovo.

Perhaps 300 tons of DU weapons were used in the first Gulf war. When it burns, DU forms a uranium-oxide smoke that is easily inhaled and that settles on the ground miles from the point of use. Once inhaled or ingested, depleted-uranium smoke can do a great deal of damage to the human body because of its radioactivity. See How Nuclear Radiation Works for details.

The Pentagon has developed tactical nuclear weapons to reach the most heavily fortified and deeply buried bunkers. The idea is to marry a small nuclear bomb with a penetrating bomb casing to create a weapon that can penetrate deep into the ground and then explode with nuclear force. The B61-11, available since 1997, is the current state of the art in the area of nuclear bunker busters.

From a practical standpoint, the advantage of a small nuclear bomb is that it can pack so much explosive force into such a small space. (See How Nuclear Bombs Work for details.) The B61-11 can carry a nuclear charge with anywhere between a 1-kiloton (1,000 tons of TNT) and a 300-kiloton yield. For comparison, the bomb used on Hiroshima had a yield of approximately 15 kilotons. The shock wave from such an intense underground explosion would cause damage deep in the earth and would presumably destroy even the most well-fortified bunker.

From an environmental and diplomatic standpoint, however, the use of the B61-11 raises a number of issues. There is no way for any known penetrating bomb to bury itself deeply enough to contain a nuclear blast. This means that the B61-11 would leave an immense crater and eject a huge amount of radioactive fallout into the air. Diplomatically, the B61-11 is problematic because it violates the international desire to eliminate the use of nuclear weapons. See FAS.org: Low-Yield Earth-Penetrating Nuclear Weapons for details.

For more information on the GBU-28, the B61-11 and depleted uranium, check out the links on the next page.

Growing Movement of Scientists Pushes for Ban on Killer Robots
Does the U.S. military have rules about tattoos?
Are robots replacing human soldiers?