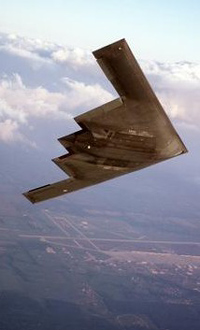 ­The B-2 bomber, commonly known as the stealth bomber, was an ambitious project, to say the least. In the 1970s, the U.S. military wanted a replacement for the aging B-52 bomber. They needed a plane that could carry nuclear bombs across the globe, to the Soviet Union, in only a few hours. And they wanted it to be nearly invisible to enemy sensors.

As you might expect, hiding a giant plane is no easy task. Northrop Grumman, the defense firm that won the bomber contract, spent billions of dollars and nearly 10 years developing the top secret project. The finished product is a revolutionary machine -- a 172-foot wide flying wing that looks like an insect to radar scanners! The craft is also revolutionary from an aeronautics perspective: It doesn't have any of the standard stabilizing systems you find on a conventional airplane, but pilots say it flies as smoothly as a fighter jet.

In this article, we'll find out how the B-2 flies and how it "vanishes." We'll also look at the plane's major weapons systems and learn a little about its history.