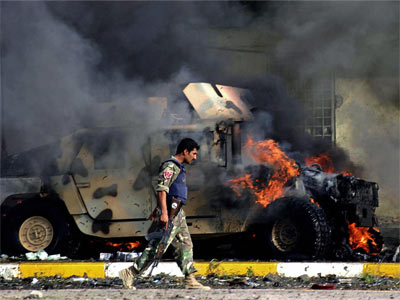 An Iraqi police commando walks past the aftermath of a vehicle-borne IED attack in Kirkuk, Iraq. The war in Iraq has seen a massive uptick in the number of deadly IED bombings occurring. See more explosives pictures.
Marwan Ibrahim/AFP/­Getty Images

­A neighborhood in Iraq reverberates with a deafening explosion. A military convoy has been hit by a roadside bomb. The explosion has left a crater in its wake, ripped apart vehicles and injured the soldiers riding within them. In a nearby marketplace, a suicide bomber blows himself up, maiming and killing scores of nearby civilians. These violent scenes have played out repeatedly in Iraq and Afghanistan since combat operations began there in the early 21st century.

It wasn't always this way. In the beginning of the Iraq war, U.S. soldiers were injured mainly from gunfire, mortars and grenades. The injuries are wrought now by a different source. The preferred weapon of insurgents and terrorists has become an improvised explosive device, or IED. You might call it a homemade bomb or a booby trap. Whatever you call it, an IED is relatively simple to make, easily hidden and very destructive.

­Soldiers, civilians, as well as paramilitary and terrorist groups, have been building and detonating homemade bombs for years.

­You could fill volumes with all the IED attacks that have occurred within the last d­ecade. That's because IEDs can be an effective strategy when facing a superior or more technological military force. Guerilla fighters, rebels and terrorists employ the weapons mainly to harass the military and to terrorize civilians and governments. Their use shows no signs of abating.

In fact, roadside bombs, which are typically IEDs, have reigned as the No. 1 killer of U.S. troops in Iraq, although the number of IED casualties dropped substantially in August 2008 [source: McMichael]. In Afghanistan, however, IED attacks a­re up 50 percent in 2008 [source: NPR]. No wonder the U.S. military is actively researching countermeasures.

This article will explore the destructive world of IEDs -- how they're made and detonated, why they're so prevalent, how they injure people and how to protect people from them.

Up next: a look inside the deadly device.