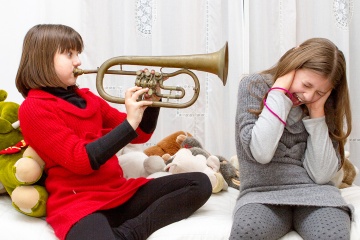 Worst case scenario, your sister's trumpet playing will just make you feel like your head's about to explode. It would take exposure to a far larger instrument for far longer to actually get that explosion.
fontina/Moment/Getty Images

In "The Calculus Affair," one of the volumes in Hergé's classic Tintin comic book series, the brilliant Professor Calculus invents a sonic device so destructive he's kidnaped by a hostile government that intends to coerce him into building acoustic weaponry. The malevolent military strategists behind the kidnaping are plotting to destroy whole cities with intense blasts of sound. Luckily, of course, Calculus's good friends, the adventurous reporter Tintin and his sidekick Captain Haddock, rescue the professor and foil the evil plot in the nick of time.

But is there any science behind this storyline? Can sound really kill? And if so, how? Sound is made by waves of pressure moving through a medium, like air. Those waves can also move through solids and liquids, which means they can move through bodies, too. Theoretically, if you can build up enough pressure, you can do some damage.

The two key measurements when it comes to sound are decibels (dB) and hertz (Hz). A decibel is a unit of sound intensity, while hertz refers to the frequency at which the sound waves are moving. Normal conversation occurs between 50 and 65 dB. A lawnmower runs around 85 to 90 dB, while a jackhammer ratchets the noise up to 110 dB, and a nearby jet engine gets you up into the 140 dB range [source: NIH].

Humans can only hear sound waves between 20 and 20,000 Hz, but sound waves can still affect us below that threshold. If you sit in front of a subwoofer with the frequency at 19 Hz, even with the volume turned up to 100 dB, you won't hear anything — but you'll feel the vibrations. In fact, at 19 Hz, your eyes start to go all wonky because that happens to be the resonant frequency of the human eyeball. If you're exposed to 177 dB sound waves at 0.5 to 8 Hz, it can start messing with your lungs, making your breathing erratic and literally shaking your bones around. Short-term exposure can damage your joints, but the effects of chronic exposure can include nausea and visual impairment [source: Horowitz].

The European Space Agency (ESA) claims that if you somehow got accidentally locked inside their Large European Acoustic Facility (LEAF) for testing the acoustic resiliency of their satellites, you wouldn't survive the sonic onslaught. A key factor here is that you'd be in an enclosed space. Outside, sound waves disperse and dissipate too quickly to reach lethal levels. That hasn't stopped researchers from investigating the use of sound as a weapon. It's been calculated, for instance, that it would require 240 dB to make a human head explode. That's a whole lot of decibels. It would be next to impossible to generate this level of noise. Even when the ESA's LEAF cranks its sound up to peak intensity, it's only putting out around 154 dB [source: ESA].

But for non-lethal purposes, sound weaponry can really come in handy. Say, for instance, you want to dissuade a boatload of Somalian pirates from joining your cruise. Try turning on your trusty $30,000 long-range acoustic device (LRAD) and hammering them with a beam of 150 dB of bone-jarring noise, which can cause permanent hearing loss for its targets even at distances of 1,000 feet (300 meters) [source: Blenford].