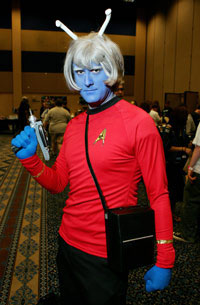 Could you hear this alien speak in space? Would you want to?
Ethan Miller/Getty Images

You're sitting in the movie theater, watching the latest sci fi action film. The screen is filled with the images of an intense space battle. The theater echoes with the sound of otherworldly noises as ship engines roar and whine. Lasers hum with energy and your seat rumbles as spacecraft explode left and right. The experience nearly overwhelms your senses of sight and hearing. But if you were really able to watch the battle in person, would you be able to hear anything at all?

If we look to science fiction films for the answer, we get conflicting results. The tag line for the film "Alien" was "In space, no one can hear you scream." The short-lived television series "Firefly" avoided using sound effects for exterior space shots. But many movies, such as the "Star Wars" and "Star Trek" series, have dozens of scenes that combine action in outer space with nifty sound effects. In which fictional universe should we believe? Would you be unable to hear the Enterprise if it zipped past you? Would the destruction of the Death Star be completely silent?

Here at HowStuffWorks, we originally planned to launch an intern into orbit to observe firsthand whether or not sound can travel through space. Unfortunately, we soon discovered that this is prohibitively expensive. Also, our insurance won't cover it. And our interns are prone to motion sickness. We'll have to rely on previously established scientific observations instead.

To get to the bottom of this question, we need to look at two important factors: How sound travels, and what's actually out there in space. Once we have this information, we should be able to tell if humans can really hear in space.

So how does sound travel? Keep reading to find out. ­