Shelter from the Storm: Protecting Space Travelers from Cosmic Rays 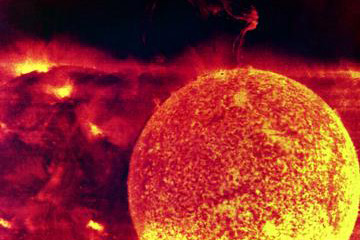 Skylab took this image of a solar flare erupting in 1973. Solar flares are just one of the sources in our solar system capable of generating cosmic rays.
Photo courtesy NASA Glenn Research Center (NASA-GRC)

Even if the social issues are solved, other challenges await humans who travel in space. One of the biggest is the constant stream of cosmic rays zipping through the galaxy. Cosmic rays are fast-moving elementary particles -- protons, electrons and stripped-down atomic nuclei -- that may originate from quasars, black holes or other objects in the universe. When these particles, encounter a human, they pass cleanly through, knocking holes in DNA as they go. Luckily for most humans, Earth's atmosphere protects us from cosmic rays. But crews traveling in outer space, even to Mars, would be exposed to dangerous doses of these high-velocity particles. They would develop cancers at higher rates and would suffer from cataracts, brain damage and other medical conditions caused by radiation poisoning [source: Parker].

The threat of cosmic rays doesn't end once a crew touches down on a foreign world. Consider the conditions on the two most likely candidates for colonization. The moon has no atmosphere, while Mars has a thin atmosphere. Neither destination would shield settlers from incoming radiation, so their living chambers would need to be buried beneath tons of soil. Even if scientists devise ways to protect colonists from cosmic rays, they will have to fulfill their basic needs. Building a self-sufficient colony that provides air, water, food, power and food will push current technologies to the limit and may require newer, more advanced technologies.

So, can we live elsewhere in the universe? If you define "elsewhere" as the moon or Mars, then yes, we can live elsewhere in the universe -- with a fairly significant investment of cash and innovation. If you define "elsewhere" as one of the exoplanets discovered by NASA's Kepler telescope, then the odds aren't in our favor. Such worlds may be reachable only in the realm of science fiction.

Keep reading for more links that travel to out-of-this-world places.