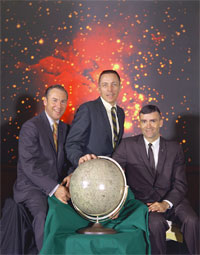 Say the word "astronaut" and you'll conjure up visions of heroes and heroic feats: Alan Shepard and Virgil Grissom successfully completing suborbital trips; John Glenn orbiting Earth aboard Friendship 7 in a historic five-hour flight; Neil Armstrong stepping down from the lunar module ladder onto the moon's surface; and Jim Lovell stabilizing the Apollo 13 spacecraft after an explosion a little more than 55 hours into the flight.

But being an astronaut is not all glamour and glory. And very often it's not about being in space. In fact, the most time spent in space by one astronaut -- Sergei Krikalyov -- is just over 803 days. That works out to be just shy of 2.5 years. When you consider most people spend 30 to 35 years in their professional careers, 2.5 years doesn't seem that impressive. What do astronauts do with the rest of their time?

Well, most American astronauts are civil servants, which is what the federal government calls its employees. As civil servants, they have to attend meetings, go to training sessions and write reports -- just like any other office worker. They do, however, possess some specialized skills unique to their trade. And they enjoy, albeit rarely, opportunities to travel and work in space. From that perspective, you might say astronauts are regular, ordinary government employees who get to travel extensively, both around the world and in space.

These days especially, American astronauts spend a lot of time on jets en route to Russia. They must do so because, following the 2011 retirement of the space shuttle program, the only way for Americans to travel into space is aboard Russian Soyuz spacecraft. Eventually, independent companies will likely offer additional options for space launches.

Before we wander into the details of astronaut work, let's start with the basics -- what exactly is an astronaut?